#11 by Huck
https://quod.lib.umich.edu/e/eebo2/A052 ... 1?view=toc
... gives a content overview of the older "Destruction of Troya". I've selected all themes, which relate to Hercules in sequence. That's a finishing part of book 1 and the complete book 2 (about 40-45% of the complete text). There's no sign of a counting of the 12 works, the 11th and 12th work is at least partly missing, Ladon and Atlas (11th work) do not appear, also not the freedom for Prometheus (12th work), but Cerberus is captured (also 12th work). However, I also guess, that the Cremona giants don't appear in many other Hercules collections. The theme Cremona is embedded in 2 Cacus adventures, and I'm impressed by 3 (not 1) Nemean lions. 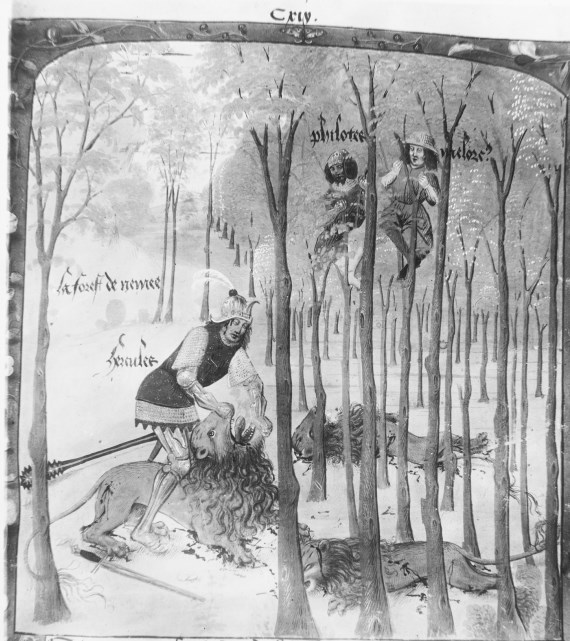 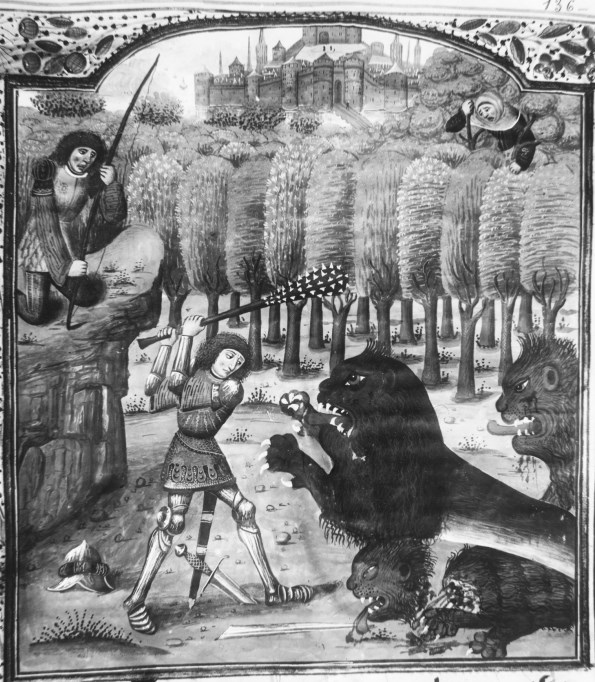 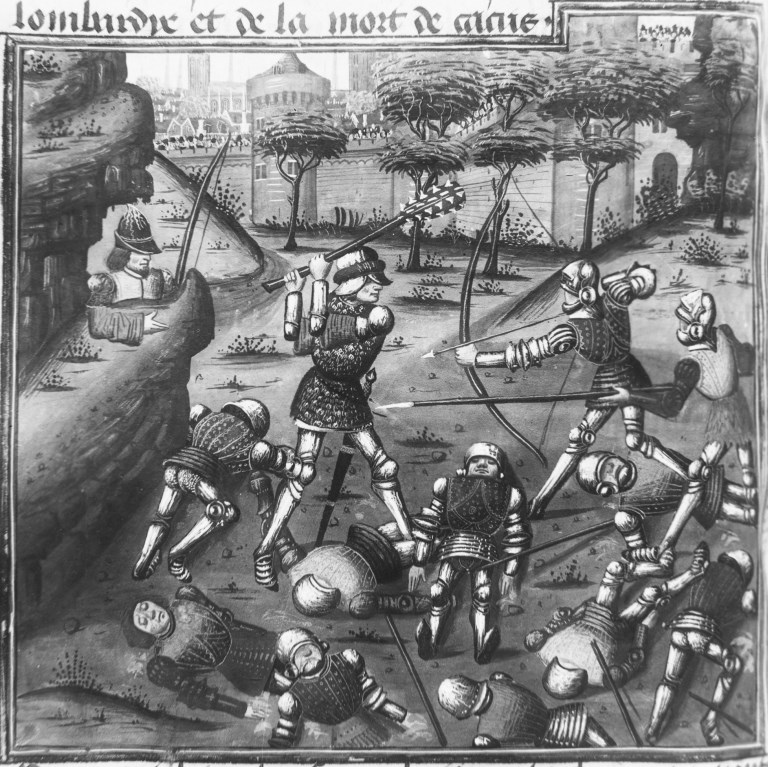 #12 by Huck
Filippo Maria Visconti got Cremona 1419 and a legend existed, that stated, that Cremona was founded by Hercules. 1419 is close to the time, when the Michelino might have been produced.
Hercules, as far I've it now, had 3 journeys to the river Po. The 10th work (? my assumption, above presented) had led him to Cremona to kill 11 giants. The 3rd work (Ceryneian Hind) made him wander far North straight through the valley of Po, as shown below. The 3rd journey (11th work) has Hercules search for Nereus, the oldest child of Gaia and Pontos, right in the river Po, which at that time occasionally was called Eriganus (somehow the river at the end of the world). Nereus knew, where Hercules could find Atlas and the garden of the Hesperids and Ladon on the apple tree. This story follows later. 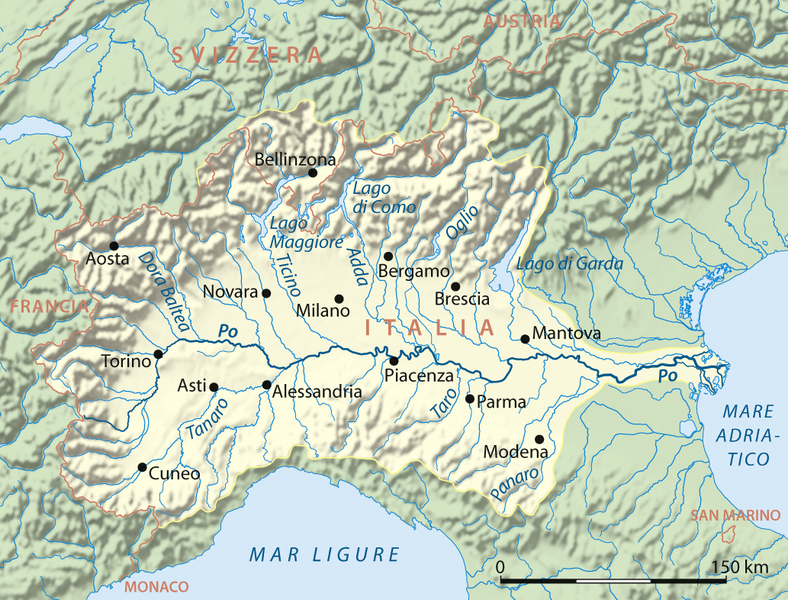 "Finally the animal was tired of the chase and took refuge on the mountain known as Artemision (Artemisium), and from there proceeded to cross the Ladon River. As it was crossing, Herakles got it with an arrow, hoisted it on his shoulders pressed on urgently through Arkadia (Arcadia)."Pseudo-Apollodorus, Bibliotheca 2. 81 (trans. Aldrich) (Greek mythographer c 2nd A.D.)

That's the scene of success in the 3rd work, right in the mid of the river Ladon, which has curiously the same name as the monster Ladon at the apple tree in work 11, in which also the Titan Atlas occurs.
Already an ancestor of Hercules has some acquaintance with Atlas. Perseus, son of Zeus by Danae, had a son Elektryon, Elektryon had a daughter Alkmene and Alkmene was the mother of Hercules. Perseus had the commission to captutre the head of the Medusa, and at this adventure he also met Atlas.


Time came, when day declining, he began to fear the night, by which he stopped his flight far in the west--the realm of Atlas--where he sought repose till Lucifer (the Morning Star) might call Aurora's (the Dawn's) [Eos'] fires; Aurora chariot of the Day.
There dwelt huge Atlas, vaster than the race of man : son of Iapetus, his lordly sway extended over those extreme domains, and over oceans that command their waves to take the panting coursers of the Sun, and bathe the wearied Chariot of the Day. For him a thousand flocks, a thousand herds overwandered pasture fields; and neighbour tribes might none disturb that land. Aglint with gold bright leaves adorn the trees,--boughs golden-wrought bear apples of pure gold. And Perseus spoke to Atlas, ‘O my friend, if thou art moved to hear the story of a noble race, the author of my life is Jupiter [Zeus]; if valiant deeds perhaps are thy delight mine may deserve thy praise.--Behold of thee kind treatment I implore--a place of rest.’
But Atlas, mindful of an oracle since by Themis, the Parnassian, told, recalled these words, ‘O Atlas! mark the day a son of Jupiter [Zeus] shall come to spoil; for when thy trees been stripped of golden fruit, the glory shall be his.’ Fearful of this, Atlas had built solid walls around his orchard, and secured a dragon, huge, that kept perpetual guard, and thence expelled all strangers from his land. Wherefore he said, ‘Begone! The glory of your deeds is all pretense; even Jupiter, will fail your need.’ With that he added force and strove to drive the hesitating Alien from his doors; who pled reprieve or threatened with bold words. Although he dared not rival Atlas' might, Perseus made this reply; ‘For that my love you hold in light esteem, let this be yours.’ He said no more, but turning his own face, he showed upon his left Medusa's head, abhorrent features.--Atlas, huge and vast, becomes a mountain--His great beard and hair are forests, and his shoulders and his hands mountainous ridges, and his head the top of a high peak;--his bones are changed to rocks. Augmented on all sides, enormous height attains his growth; for so ordained it, ye, O mighty Gods! who now the heavens' expanse unnumbered stars, on him command to rest."
Ovid, Metamorphoses https://www.theoi.com/Heros/Perseus.html#Atlas

In the 3rd work a daughter of Atlas made her appearance. Taygete, one of the 7 Pleiads (all daughters of Atlas), was persecuted by Zeus and with help of the goddess Artemis she escaped (Artemis has changed her to a cow). Thankful Taygete made a glorious present to Artemis, 5 hinds the goddess got. She could use 4 of them for her chariot, but the 5th didn't found a function. This became the "Ceryneian Hind" and made some difficulties and Hercules got the commission to solve the problem. Nonetheless Taygete got Lacedaimon as king of Sparta as a son of Zeus in the opinion of many.

1. Pseudo-Apollodorus, Bibliotheca 3. 116 :
"[Of the Pleiades :] Taygete bore Zeus Lakedaimon (Lacedaemon)."
2. Pausanias, Description of Greece 3. 1. 2 (trans. Jones) (Greek travelogue C2nd A.D.) :
"Lakedaimon (Lacedaemon), whose mother was Taygete, after whom the mountain was named, while according to report his father was none other than Zeus."
3. Pseudo-Hyginus, Fabulae 155 (trans. Grant) (Roman mythographer C2nd A.D.) :
"Sons of Jove [Zeus] . . . Lacedaemon by Taygete, daughter of Atlas."

Ranke-Graves knows versions according which Taygete hanged herself for this and became then a mountain region called Taygetos (near Sparta). Ranke Graves notes then arguments, which relate the hunt on the hind in context with long journeys in the Northern country of the Hyperboreans.

"Heracles then chased the hind on foot for a full year through Greece, Thrace, Istria, and the land of the Hyperboreans."
The Hyperboreans were located by some writers on the British islands. Ranke Graves assumed, that Hercules in his hunt of the hind took the way
Greece, Istria (old Jugoslawia), the river Po till its source and then through France to the British islands.


Ancient identification of Hyperborea with Britain

Hyperborea was identified with Britain first by Hecataeus of Abdera in the 4th century BC, as in a preserved fragment by Diodorus Siculus:

In the regions beyond the land of the Celts there lies in the ocean an island no smaller than Sicily. This island, the account continues, is situated in the north and is inhabited by the Hyperboreans, who are called by that name because their home is beyond the point whence the north wind (Boreas) blows; and the island is both fertile and productive of every crop, and has an unusually temperate climate.[22]

Hecateaus of Abdera also wrote that the Hyperboreans had on their island "a magnificent sacred precinct of Apollo and a notable temple which is adorned with many votive offerings and is spherical in shape". Some scholars have identified this temple with Stonehenge.[19][23] Diodorus, however, does not identify Hyperborea with Britain, and his description of Britain (5.21–23) makes no mention of the Hyperboreans or their spherical temple. (See the section "Legends" below.)

Pseudo-Scymnus, around 90 BC, wrote that Boreas dwelled at the extremity of Gaulish territory, and that he had a pillar erected in his name on the edge of the sea (Periegesis, 183). Some have claimed this is a geographical reference to northern France, and Hyperborea as the British Isles which lay just beyond the English Channel.[24]

Ptolemy (Geographia, 2. 21) and Marcian of Heraclea (Periplus, 2. 42) both placed Hyperborea in the North Sea which they called the "Hyperborean Ocean".[25]

In his 1726 work on the druids, John Toland specifically identified Diodorus' Hyperborea with the Isle of Lewis, and the spherical temple with the Callanish Stones.

Herodot had another worldview about the Hyperboreans (somewhere in the North of Asia).

Users browsing this forum: No registered users and 51 guests