#341 by Phaeded
Phoenix is even more of a problem - you can decide for yourself is the lower bird on BR151v is a phoenix, which Meiss/Kirsch unhelpfully describe as "strange winged creatures" (the last Grassi illumination in the Visconti Hours, BTW).

One of the Spanish libraries (Valencia?) has a manuscript of Ippolita Sforza (married an Aragon) who used the Phoenix as an impresa. Sorry I can't remember which manuscript but you might also check out this article for a possible clue: 'FA FINIRE UNO BELLO STUDIO ET DICE VOLERE STUDIARE.' IPPOLITA SFORZA AND HER BOOKS', Judith Bryce, Bibliothèque d'Humanisme et Renaissance, T. 64, No. 1 (2002), pp. 55-69 [JSTOR].

Bona di Savoia when regent of Milan (1476-1481) apparently issued coinage with the Phoenix as a reverse:
https://www.cronacanumismatica.com/bona ... -gadoury/

For a variety of Peacock poses for the pips, don't neglect these two leaves in the Visconti Hours:
BR 35v and LF130v....the latter (rounded/full tail peacock) looks lifted from Grassi (this could be the "1"/ace):

#342 by Phaeded
Back to Grassi - there are no folio #s on-line so I've just provisionally named them - a "Q" = question mark, as I'm unsure of what is depicted, despite a hazarded guess (I've already provided the Lion and Peacock above, so not reposting those images here).

The Hoopoe is atop of the Giangaleazzo leaf 35v in the Hours that also feature peacocks and must mean something - the only interesting thing besides "faithfulness" was it being symbolic of Solomon's wisdom but the source is Persian -Attar of Nishapur in his 1177 epic, The Conference of the Birds - and I'm unaware of translations into a language an Italian would know.

Just went back and read your follow-up - I missed the word "fenice". Certainly does not look like the Byzantine mosaic versions of the Phoenix (and why white?)

At least you have your 4 pip of eagles and 2 pip of Phoenixes (and as "riches" may as well leave the crown).

What is really odd is that the crown-conjoined phoenixes look heraldic (Giovanni Maria's? For Filippo right after Giovanni Maria died to represent the two brothers, the other emerging in the ashes of the deceased one, like the Dioscouri?). But then one reads in Decembrio that he invented additional imprese that Filippo never used, so perhaps Grassi was just fleshing out more impresa ideas never used? And there is a heraldic impresa opposite (not to mention the radiant sun over the phoenixes)....

I will point out the first time the knotted cloth impresa, upper right shield below, gets used in the Visconti Hours is LF 85v, "Rod of Moses Changed into a Serpent" (certainly suggestive of the biscione, also on two of the four shields surrounding the main action).

Phaeded wrote: ↑
24 Jun 2020, 23:29
Phoenix is even more of a problem - you can decide for yourself is the lower bird on BR151v is a phoenix, which Meiss/Kirsch unhelpfully describe as "strange winged creatures" (the last Grassi illumination in the Visconti Hours, BTW).

One of the Spanish libraries (Valencia?) has a manuscript of Ippolita Sforza (married an Aragon) who used the Phoenix as an impresa. Sorry I can't remember which manuscript...

Found the Ippolita MS - it was Valencia: https://colecciones.uv.es/s/Somni_sub/item/57823 (can't get the zoom function to work there)


This manuscript of 1465, belonged to the Duchess of Calabria, Ippolita Maria Sforza. After his wedding with Alfonso de Aragón, Duke of Calabria, fourteen manuscripts were taken to Naples as part of his dowry. Of these codices, two are preserved in the University of Valencia, Ms. 49 and this Ms. 891 that contains the works of Virgil. This codex is one of the most beautiful manuscripts of the miniaturist known as the Master of Ippolita Sforza.
Decoration: in the frontispiece (1st page) appears the initial P with the image of Ippolita in the interior accompanied by a phoenix, emblem of immortality and resurrection. The entire manuscript presents initials, beautifully miniatures that illustrate the works of Virgil.
328 pages. 433 x 280 mm, binding 450 x 310 mm. Transcribe the Eclogues, Georgics and the Aeneid. Ancient humanistic writing on vellum. Language: Latin
Duke of Calabria Collection. Historical Library. BH. Ms. 891.


The image quality is for shit, but below is Ippolita on the Virgil MS with the phoenix at her feet (the rest of the folio is surrounded by the Visconti dove) and to the right the BR151v "strange bird" that looks close enough to Ippolita's phoenix (angular and brightly colored):


Edit: finally got the Valencia biblioteca zoom to work - 2nd initial of Ippolita with the phoenix (the long beak looks very much like the "strange bird" in the Visconti Hours and nothing like the hooked hawk beak in Grassi):

Too bad not a male - you could make that image King of Phoenixes. Also note it dates from 1465 as part of her dowry.

At all events, as an imaginary bird, there does not seem to be a set prototype. I can see the temptation to use Grassi's fenice, but quite frankly that looks like a "swan-duck" and would just confuse the viewer. At least make the bird multi-colored or red to denote its fantastic nature.

And to be fair to what Huck posted, that bestiary-style phoenix lasted well in to the 15th century:

#347 by Ross G. R. Caldwell
One thing all these model books and artists lack is good studies of fish.

And how often did a medieval artist actually see a dolphin out of water? This is just as bad as that Dolphin/Dauphin illumination detail: 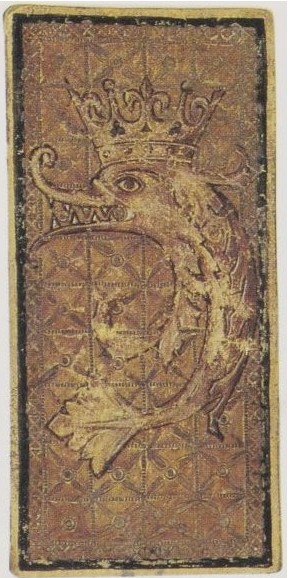 BTW: I don't think that Ippolita/Phoenix illumination is an impresa, but rather more of an "emblem": with hi-res you can make out her left hand resting on her belly in the second initial - the Madonna del Parto gesture. A bio on her says the manuscript was commissioned for her 1465 wedding but her eldest Ferdinand wasn't born until 1469 - quite a bold move to portray Ippolita as nubile/child-bearing before the fact (maybe why the left hand - as "potential" - versus the usual right hand; just the fingers of the left hand are visible while the right holds the leash to the phoenix). And the phoenix? Someone has died and to be "reborn" in a dynastic sense? Alfonso V of Aragon had died in 1458, so perhaps the whole thing was a means of flattering her new spouse, the Duke of Calabria (and ruled as King Ferdinand II of Naples at the very end of his life from 25 January 1494 to 23 January 1495), with the idea that he was to give issue to a "new Alfonso" or a ruler of that stature? I can't see any other reason for painting the Phoenix with a del parto pose....

#349 by Ross G. R. Caldwell
What sources do you think Michelino could have used for the gods? The Libellus was probably not drawn yet when he painted the cards, so we can exclude that. We know how he treated Jupiter and Venus in 1403 - just as contemporary people, really. But does this give us the full picture? Would Neptune just be Jupiter in a sea-chariot with a trident?

He knew togas, at least at some point. I ordered some drawings from Vienna when I first started working on this, in 2003, which shows figures dressed in togas. But would he have made classical-style gods in the teens? Or would he just have gone with the Ovid Moralized tradition?

#350 by Ross G. R. Caldwell
It is still striking to me that Marziano chose the phoenix over the peacock as the bird of riches. Especially since he moralizes the eyes of the tail feathers to represent the many eyes the rich man needs to keep watch over his riches.

One consideration that the BH ms 891 images suggested to me was that the irridescent, rainbow-like colors of the peacock are also used as the basis for those phoenixes. So it could be that Marziano was inspired for this choice partly by the comparison with the standard peacock, a very colorful bird.

But why he decided not to go with the peacock is still inexplicable to me.