#11 by Huck
Phaeded,
I haven't shown you this one.

At another place and another deck, the Rosenwald Tarocchi sheet, ....
http://trionfi.com/rosenwald-tarocchi-sheet .... by Franco Pratesi
.... appeared another 69 and the situation demands some attention. 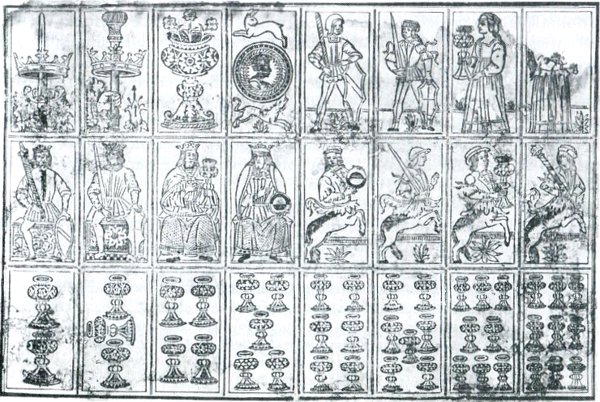 Franco suggested, that the Rosenwald Tarocchi was meant as a Minchiate with one additional 4th sheet missing (containing 19 trumps, four 10s and one Queen). In the internal discussion the suggestion was made, that the Rosenwald was mixed deck type, with the intention, that one could produce with 4 woodblocks 3 different deck types . This theory assumed: 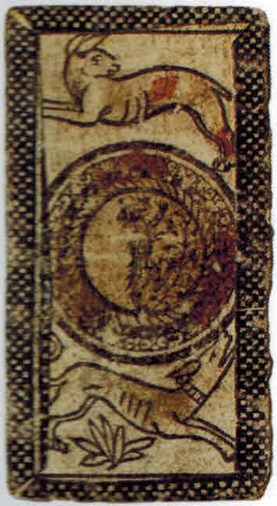 Version B and the 69 stood isolated, but now with Lucca and its 69 cards and the year 1369 there's suddenly a context. Florence and Lucca were occasionally difficult neighbours.

The alliance between the Republic that at the time was controlled by the Guinigi family and the Duchy of Milan led Lucca into the ruinous war against Republic of Venice and Republic of Florence; towards the end of this war, an insurrection finally ended the dominion of the Guinigi family and the republic had to negotiated in order not to lose its independence, which led it to lose parts of its former territories.[8]
In 1429 Florence besieged Lucca to take revenge on the republic. After several days of siege, the republic of Lucca asked Duchy of Milan for help. The Duchy sent Francesco I Sforza, who overwhelmed the Florentines with his army and forced them to retreat. A few days after the retreat of the Florentines, the inhabitants of Lucca arrested Paolo Guinigi, the leader of the republic, because he was said to have dealt with the Florentines. Florence later paid Sforza to abandon Lucca and, in 1430, Lucca was besieged once again. During the siege the Florentines tried to stem the Serchio to flood Lucca, but due to some errors the Florentine camp flooded. Meanwhile the Lucchesi asked again for help from Filippo Maria Visconti, duke of Milan, who, once again, acted indirectly (according to a previous treaty Milan could not interfere in the affairs of Florence) asking the Republic of Genoa to help Lucca. Genoa, relying on an ancient alliance with Lucca, asked Florence not to disturb Lucca. When Florence refused, Genoa sent an army of 6,000 men led by Niccolò Piccinino who attacked the Florentines on the Serchio and, after a bloody battle, they were forced to withdraw because the Lucchesi had taken them behind leaving the city.

https://en.wikipedia.org/wiki/Republic_of_Lucca
In 1437 Florence attacked and conquered Montecarlo, the small city, which was founded by Karl IV. (about 20 km distance to Lucca). In 1440 Piccinino returned ... there was something, I remember.

For Minchiate (Blocks 1-4) we have the game with 14 cards for each suit and totally 40 trump cards, and 14 and 40 make 1440, if one assumes, that the Fool didn't exist).
Well, this makes sense, if one assumes, that Lucca made a card deck, which expressed the year 1369 to honor the value of the republic.

In 14th century Lucca is said to have had 250 Towers. The Guinigi Tower still stands.
Huck
http://trionfi.com

The following pdf-file seems to refer to the same deck
http://www.luccamuseinazionali.it/sites ... 0Lucca.pdf

Card games: minchiate and tarot cards in eighteenth-century Lucca
In an article that appeared in the Lucchese Historical Bulletin of 1932, the author, F. Pellegrini, posed the following
questions: “Cards were used in Lucca in the 14th century and, both in this century and in the following ones
did they build in Lucca or did they come from outside? ”. To date these questions can be answered with the following
data. The use of playing cards in Lucca has been documented since 1419 (1): a dispute that took place during is reported
a game of cards. Subsequently in the Bongi Collection of Lucchesi Bands (1863) there is the date of
a first decree on card games with the comment that “in Lucca the new game of the naibi was tolerated
longer than in the neighboring villages since it is not forbidden on August 28, 1436 "(2). How long
it concerns their manufacture, however, the first date dates back to 1570 when a certain Lorenzo Zacchia asks
the grace of being able to live from his profession "which is to make cards" which for the city is a "new art"
prohibiting the use of "foreign" ones. (3)
From the end of the 1500s to the early 1600s in all the other ancient Italian pre-unification states the proceeds of the factory
and sale of playing cards was outsourced to private individuals. In Lucca this system was adopted about one
century later starting from 1 January 1700 in application of the decree of the Grand Council of the city of 24
September 1699 and remained, with subsequent three-year contracts, until the early nineteenth century. The arrival of the French
and the Provisional Government of the new Democratic Republic of Lucca decreed its abolition by law
of 13 November 1801, making the making of playing cards free to anyone.
From this date on until the transfer of the Duchy of Lucca to the Grand Duchy of Tuscany (1847) the laws on
playing cards changed with each change of government. During the period of the Principality of Lucca and
Piombino (1805-14) returned to being a kind of patent. Under the Duchy of Maria Luisa of
Bourbon (1817-24) their production was again made free, but with the obligation that they should
print on sheets with a particular watermark of the size that can contain 24 cards per sheet and from
cost of ten cents each. Under Charles Ludovico Borbone (1824-1847) the use of paper was abolished
watermarked, replaced by a duty of 2 soldi for each deck, and a red stamp to be affixed
on the wrapping band and on the figure of the King of Hearts.

"Germini" and "Minchiate" are terms that refer to the same card game originating in Tuscany,
between the second half of the 1400s and the first half of the 1500s, and played with a particular deck of 97 cards,
obtained by increasing in the standard Tarot deck to 78 cards, the number of Triumphs from 21 to 40. These
twenty new Triumphs were inserted en bloc under the 5 highest Triumphs, unnumbered and called "ARIE", and
above the first 15. They represent respectively from n. XVI to n. XVIIII the three theological Virtues (Hope Faith-Charity) and the fourth cardinal Virtue missing in the T. Standards (Prudence), from n. XX at no. XXIII i 4
elements (Fire-Water-Earth-Air) and from n. XXIIII (Libra) to XXXV (Gemini) the 12 zodiac signs.
At the National Museum of Palazzo Mansi, a beautiful and complete bouquet of
cards for the game of Minchiate from the first half of the eighteenth century. It is the only known example of Minchiate from
XVIII century, which thanks to the presence on the XXIIII triumph (the Libra) of the name Santi Giovannelli,
contractor of the Proceeds of the playing cards in Lucca in the years 1720-1751, can be attributed with
certainty to the city of Lucca.
A whole series of decks of cards characterized by the absence of all are also attributed to the city of Lucca
the particular triumphs of the Minchiate (from XVI to XXXV) and of those from n.I to n.VIII, and by preserving instead the
trumps VIIII to XV and the 5 highest trumps, along with all 56 suit cards. These decks feature,
in addition to a different drawing of the figure of the Fool, different drawings on the figures, in particular the 4 non horses
they depict centaurs or other monsters as in the Minchiate, but knights on horseback as in the Tarot.
The combination of these characteristics has led to think that these decks are attributable to one type
special of tarot cards with only 69 cards instead of the usual 78. They have been attributed to Lucca, so much so to be
defined as "Tarocchi Lucchesi", as in all the knave of swords holds a shield with the colors white and red
of the coat of arms of the city. On the backs of these decks three designs prevail: on one is represented Orpheus and the
written "Orfeo", a second bears the words "d’Lucca", a third shows a halberdier with the words "Alla
Fame ". The latter is identical to the back of the Minchiate deck of Palazzo Mansi and is a further one
element that contributes to attributing these decks to Lucca. Examples of "Tarocchi Lucchesi" are
preserved, in varying degrees of completeness, in various private and public collections. Two are also known
copies of 69 cards, one at the Schaffhausen Museum and one in a private Tuscan collection. Remains
the enigma of not being able to find in any document a reference to the 69-card Tarot game or
relating to their actual production in Lucca.

Franco wrote to 1419:
"The oldest document which I was able to discover about playing cards in Lucca is a play, which
equally well might have occurred several centuries later. Domenico di Jacopo da Pietrasanta
complains about Cecco da Cascina because he had been very rude in addressing him while he was
observing people playing cards in a tavern of Massa Lunense. (3) We have no information on the
specific game played, but the date of 12 October 1419 is early enough to be recorded for people
playing cards in taverns around Lucca. This is probably the first bystander we know by name in the
history of playing cards. We can assume in any case that the game had already spread its tentacles
widely. "

"Two are also known copies of 69 cards, one at the Schaffhausen Museum and one in a private Tuscan collection."
I don't remember to have seen this clearly written elsewhere. If itis a correct statement, this would be nice.

Users browsing this forum: No registered users and 30 guests