A divination book, using schemes of Geomancy. Checking our search engine, I see, that already mmfilesi had pointed to the text in 2010:

Its the same that Pietro d’Abano


Soon enough, as I have said, in 1559, divination books of all kinds were put on the Index. As I recall, the most common types were even listed: geomancy, pyromancy, chiromancy, hydromancy. These are all types talked about in the Greco-Latin classics and so there would be no harm done in publicizing them. Cartomancy is not there; but there is an “and others of that sort”, an “etcera” at the end. Unfortunately I cannot find my reference to this quote, but here is an 18th century note that gives the thinking, by Apostolo Zeno in his posthumous (d. 1750) Annotazioni to the Biblioteca della eloquenza italiana of Giusto Fontanini ((I get this quote from the article “Le Risposte di Leonora Bianca: Un gioco di divinazione del tardo Rinascimento” by Eleonora Carinci, p. 170 (http://books.google.com/books?id=w6Kyui ... ca&f=false). Carinci’s main theme is a lot-book published by one Leonora Bianca, which Gianmaria Mazzuchelli in Scrittori d'Italia suggested might be the pseudonym of Aurora Bianca d’Este, a vernacular poet in Venice at that time (but not listed in any d’Este genealogy, according to Carinci, p. 171). Bianca’s book combines the 28 Mansions of the Moon, the 16 geomantic images, and a journey to Dante’s Hell, in order to get rather whimsical answers to the usual questions). Here is the quote from Zeno (p. 170):

(All these below do not deserve to be spoken of, but the example of Monsignor gave me excitement. Father Ménestrier (l.c. p. 407) rightly condemns all this sort of games, asserting that in truth they cannot be allowed, not only in respect of such divination, which is mere balderdash, and chimaras, but because in essence they abuse holy things, impugning the names of the Prophets, giving into the hands of liars responses to vain and profane questions; so it is with reason that all these books of Fortune and Fates were condemned by the index of Trent (in Fontanini 1753, 190).

A few months later MiKeH again pointed to this source:

Unluckily my books.google.com offers only a not complete version.

The introduction of the books speaks in the context of Leonora Bianca of the year 1524 and of "Sig. Gioangiacomo Triulcio", which might be the well known "Gian Giacomo Trivulzio ... https://en.wikipedia.org/wiki/Gian_Giacomo_Trivulzio
... but this was dead in 1518.

The notes to Leonora Bianca seem to have been written by for a "Madonna Benedetta Pisana" (dedication, possibly 1565) ... a poem exist with the name "Ne la morte di Madonna Benedetta Pisani" ...
http://ww2.bibliotecaitaliana.it/xtf/vi ... rand=bibit
... and the author of the poem was Bernardo Tasso ...
https://en.wikipedia.org/wiki/Bernardo_Tasso
... and Bernardo died in 1569 (76 years old). So it's possible, that Benedetta Pisani (or Pisana) was an older lady, who died between 1565 and 1569. Leonora Bianca might have been her friend in their youth.

Not to forget: Bernardo Tasso was the father of Torquato Tasso.

The dedication is difficult to read. ... it seems, that a Marc. Ant. Pisani is noted.

My Italian is not good enough for this text, my fantasy possibly went the wrong way. Perhaps somebody else could do better. 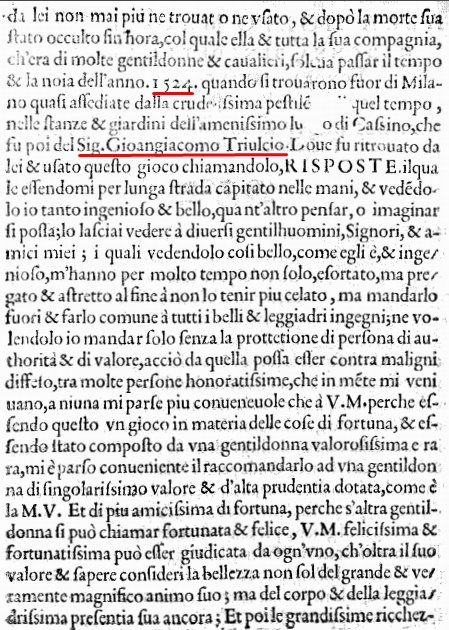 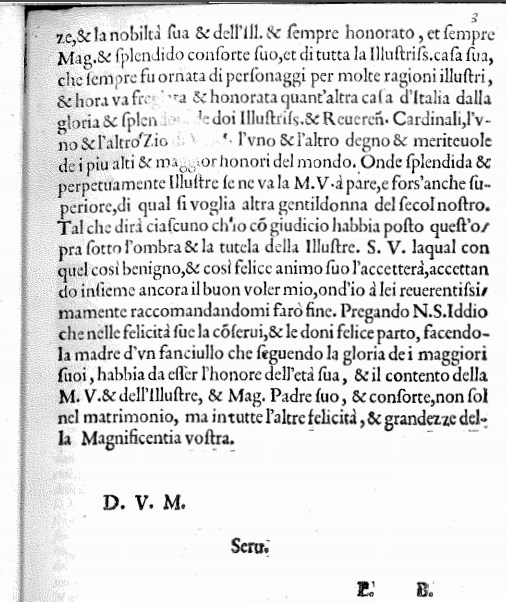 No listing of 16th-century Dante editions includes this imprint. Its extreme rarity is due to its odd history, a curiosity in the annals of early Dante publishing, providing insight into the commercial wiles and ways of the Venetian press during this period.

In 1564, the printer Francesco Rampazetto had in some way come into possession of unsold stock of the twenty year-old 1544 Marcolini edition with the Vellutello commentary. He may have wanted to take advantage of the same renewed interest in Dante following the Council of Trent which had stimulated Sessa's entry into the market. In any case, Rampazetto replaced the Marcolini title page and first folio with his own title page, and reset the dedicatory letter to Pope Paul III and the first page of Vellutello's "Letter to the readers" which had occupied the second folio of the original.

When he was not recycling old books under new titles, Rampazetto was occupied with an abundant output of approximately eighty editions between 1553-1576, including many books of music. He also contracted with the Sessa to print their 1578 Comedy. Among his printer's marks is the one displayed here depicting cloud-borne putti garnishing laurel wreaths with the motto: "Et animo et corpori" (Both for the soul and for the body).

Users browsing this forum: No registered users and 15 guests