which I take to mean "In the second Triumph he treats the principle of Reason, which he signifies through the person of Lady Laura"

I'm just guessing at the reading "singe" and the meaning "signifies".


I think 'signifies' is a close enough translation: but I don't think it is 'singe', but 'finge' = fingere - pretend, fake, simulate, imagine: to be understood as akin to the use of the synonym 'simula' (simulare)* in the previous sentence:

They are poetic personifications (allegorical masks, pretences or simula) of the sensual appetites (signified by Cupid) and reason (signified by Laura).

* synonyms Finge & Simula both present indicative conjugations of lui, lei, egli (him, her/she, he)
Immature poets imitate; mature poets steal; bad poets deface what they take, and good poets make it into something better, or at least something different.
T. S. Eliot

RagioneLaura.JPG
(32.62 KiB) Not downloaded yet

#24 by Ross G. R. Caldwell
Thank you very much, Steve. From this edition it is clearly "finge", which isn't so clear in my edition.

Huck wrote: For the case of Laura-Daphne and Ovid the "perverse Cupido" is a natural part of the story.

btw ... I think, that "Daphne" is just the Greek word for the Roman "Laura"
https://en.wikipedia.org/wiki/Daphne_(plant)

Δάφνη (Daphne) as a name is transliterated in translation not translated. That is, in translations of Ovid, including Latin and Italian, the name remains Daphne, not Laure. If Boairdo had meant Ovid's Daphne, he would have wrote Daphne.

Laura as Daphne is a Petrarchian motif, one may identify her with the story of Daphne as Petrarch did, drawing upont the word-play of Laura/Daphne = Laurel, but it is Petrarch's Laura that is being directly referred to, not Daphne.

However, Boiardo's verse here does not refer to Laura as Daphne, but to Laura as a personification of Reason, triumphing over the sensitive or bestial appetite (the perverse child Cupid). As a poetic theme one that is found in Dante, Boccaccio and Petrarch rather than Ovid.

The description of Cupid as 'perverse' is a common one, along with other such descriptions as 'playful' or 'fickle'.

Perverse = deviating from what is considered right or good; wrong, improper, etc. or corrupt, wicked, etc.

Reason made Laura triumphant
over the perverse child cupid, she never turned
her eyes from virtue, nor put a foot wrong.

For An intermission
A litte shakespeare:

'Since thou art dead, lo, here I prophesy:
Sorrow on love hereafter shall attend:
It shall be waited on with jealousy,
Find sweet beginning, but unsavoury end,
Ne'er settled equally, but high or low,
That all love's pleasure shall not match his woe.

'It shall be fickle, false and full of fraud,
Bud and be blasted in a breathing-while;
The bottom poison, and the top o'erstraw'd
With sweets that shall the truest sight beguile:
The strongest body shall it make most weak,
Strike the wise dumb and teach the fool to speak.

'It shall be sparing and too full of riot,
Teaching decrepit age to tread the measures;
The staring ruffian shall it keep in quiet,
Pluck down the rich, enrich the poor with treasures;
It shall be raging-mad and silly-mild,
Make the young old, the old become a child.

'It shall suspect where is no cause of fear;
It shall not fear where it should most mistrust;
It shall be merciful and too severe,
And most deceiving when it seems most just;
Perverse it shall be where it shows most toward,
Put fear to valour, courage to the coward.

'It shall be cause of war and dire events,
And set dissension 'twixt the son and sire;
Subject and servile to all discontents,
As dry combustious matter is to fire:
Sith in his prime Death doth my love destroy,
They that love best their loves shall not enjoy.'

Ross G. R. Caldwell wrote:Thank you very much, Steve. From this edition it is clearly "finge", which isn't so clear in my edition.

He repeats much the same thing, using 'fingendo' in reference to Amore, and reason beneath the veil of Laura:

#27 by Huck
If I would follow your conclusions, I would get, that Boiardo took the relation of Petrarca to his Laura as a sign of a perverted Cupido.
I remember, that Filelfo said something in this direction, indicating, that, if Petrarca would have been a real man, he would have stormed the resistance of the young lady instead lamenting so much words about her.

It stays, that Laura (in the poem) without Daphne in the background wouldn't do much. and the other figures are all of older times.

If Viti (who likely arranged the not very artful pictures of the card deck around 1497) did chose as a motif the picture of Laura (the muse of Petrarca), it might be just his personal interpretation. The motif of the 3 graces for the tercet 6 also looks doubtful to me:

"Gratia" (singular) is not "Gratiae" (plural) in the text and from the virtues-vice scheme used by Boiardo one expects a virtue, not a 3-persons-group.

I once searched for evidence, that Viti had indeed contact to Boiardo, but it seemed doubtful. Boiardo likely was much in Modena in his late years (he died 1494). And Viti was just about 24 years, when Boiardo had died.

When Maximilian became emperor in 1494, this caused a renewed interest in the title poetus laureatus (which naturally created a Daphne fashion in Germany). This action needed the developments around Celtis and this needed some time.
Well, Bianca Maria Sforza became empress in this same year (1494), and Bona of Savoy (Bianca Maria's mother) once possibly had become the female model of this picture ... 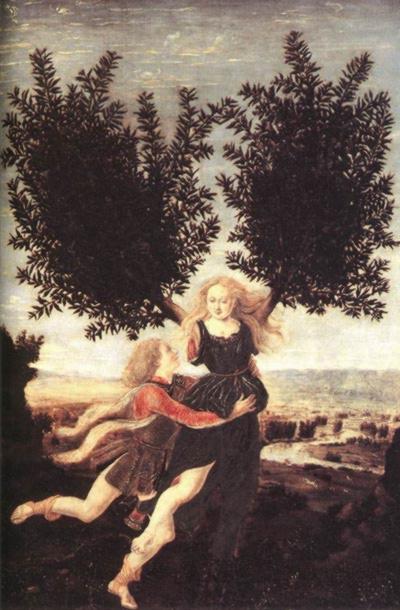 ... according the researches of Maike Voigt-Lüerssen (in contrast to the source, which Phaeded recently noted). If Voigt Lürssen is right, Bianca Maria's arrival might have played a role in this fashion.

An old manuscript in the library of Wolfenbüttel has 2 illuminations, nowadays it's assumed, that they were made by Giovanni Pietro Birago: 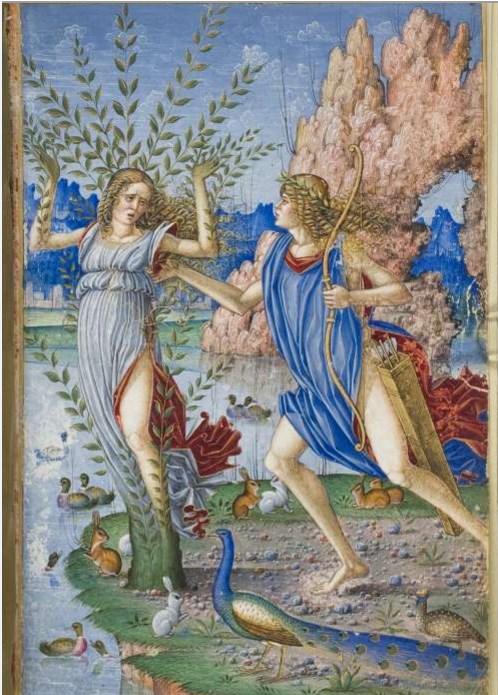 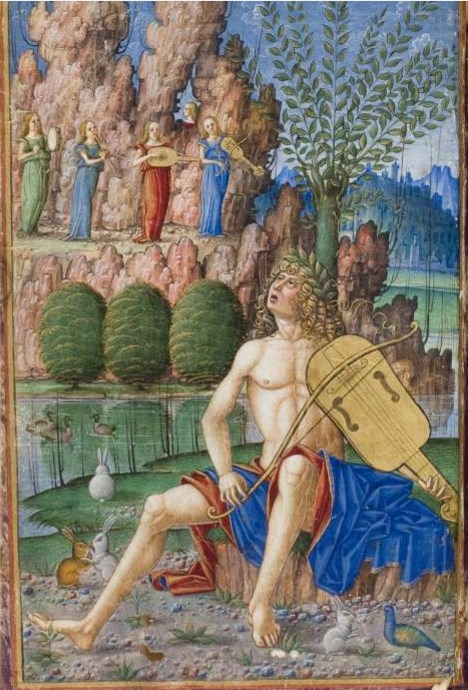 Both motifs were found with variations around Celtis (about 1501/02), who got a high position at the university in Vienna and could care for more poeti laureati.
https://en.wikipedia.org/wiki/Conrad_Celtes 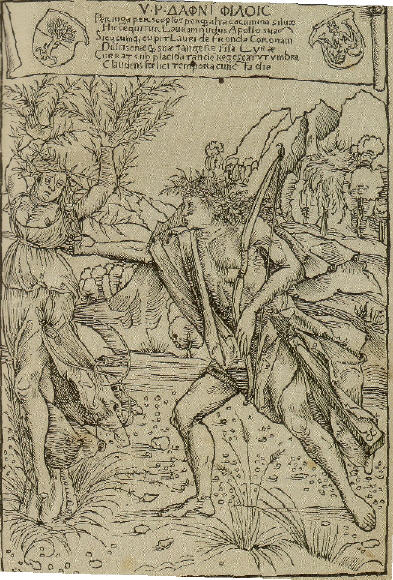 Birago (from Milan) had worked for Bona of Savoy. Either by Bona herself, after she was freed by the French from her stay on Milanese territory (1500), or by her daughter, the Empress Bianca Maria Sforza, these pictures should have come to the circles of German humanists.

Well, I don't want to follow the Daphne problems for the moment. I think, the Boiardo Tarocchi is the theme in this thread. It doesn't change much, if you interpret tercet 4 as a sign of Petrarca's Laura and I prefer the variant "Daphne from Ovid".
Huck
http://trionfi.com
SteveM
SteveM

Huck wrote:If I would follow your conclusions, I would get, that Boiardo took the relation of Petrarca to his Laura as a sign of a perverted Cupido.

Boiardo read Petrarch's Laura as a personification of Reason, that triumphed over the 'perverse child Cupid', the bestial appetite that is 'perverse' in as much that it acts against reason( "l'appetito sensitivo è contrario alla ragione" = [perverso] Cupidito contrario Laura).


Huck wrote: "Daphne in Laurum", states this edition.
"Daphne in laurum conversa" has a version in British library.

Yes it is, her name in both is still Daphne. And Daphne changed into a tree is very different to Daphne was changed into another person called Laura. The Laura/Daphne = Laurel wordplay is a Petrarchian motif. You're right that Daphne becomes Laura isn't far, in as much, as has already been explained, it happens with Petrarch.


It stays, that Laura (in the poem) without Daphne in the background wouldn't do much..

Re: my posts above perverse Cupid contra Reason which fits perfectly well in terms of Boiardo's verse without any reference to Laura as Daphne; but in as much as Petrarch identified Laura with Daphne, it is possible to bring Daphne into it as well.
Immature poets imitate; mature poets steal; bad poets deface what they take, and good poets make it into something better, or at least something different.
T. S. Eliot
SteveM
SteveM

Possibly Lapini's commentaries were themselves the impulse behind Boiardo's production. The first printed edition was in 1475, however it was also produced in manuscript (there are 9 manuscripts still extent), and likely it was in luxurious and illustrated manuscript form that it was presented to the Duke of Modena, Borsa d'Este, to whom it was dedicated, giving a terminus of 1471*. The commentary includes reference to the death of the Duke of Milan, and it also contains some literal references that rely on an Italian translation of Bruni which make it post 1466. Lapini was in Ferrara from 1469*, he is included among of list of masters ennobled or knighted by the Emperor Frederick III in February that year in Ferrara, to whose entourage Boiardo was assigned during his visit.

Fortitude as highest trump may be a compliment to Ercole d'Este, who made much of self-representations of himself as Hercules, with which Fortitide was associated. The theme you mentioned re: 'forza d'Ecole' at the finale of Lucrezia's wedding procession was first used at the wedding of Ercole, and much later again by his Grandson Ercole II, who also made much of self-representations as Hercules and the forza d'Ercole cycle. Boiardo's poem, even with its passing mention of Hercules, is not an example of a forza d'Ercole themed poem; but Fortitude as highest trump may nonetheless be a nod in tribute to Ercole d''Este.

*There is no reference to Borsa d'Este being the Duke of Ferrara, which he was made in 1471; also he died in 1471.
*Francesco Sforza, whose death is referred to in the commentary, died in 1466,. The Bruni text was available prior to 1466 in Latin, however text comparison shows that it was the Italian translation Lapini referred to, which was published in 1466.
Immature poets imitate; mature poets steal; bad poets deface what they take, and good poets make it into something better, or at least something different.
T. S. Eliot 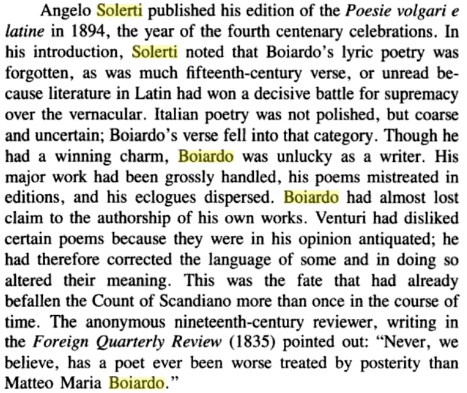 It speaks of the generally bad state of Boiardo's poem's. The book presents the first editions of the printed Boiardo.

The version of 1523 is given at books.google.com (the year is not given by the impressum, but by google).
https://books.google.de/books?id=Z5ZW1_ ... navlinks_s
The Tarocchi poem is at page 34-38 (Folio-counting; numbers are handwritten at the lower right side of the pages). The opening poem is given at the last page.
In the following years there were other editions.

A footnote indicates, that the manuscript of Viti had been in the possession of the Viti-family till 1896 .... so likely it wasn't printed till this time (?). Any contradicting information known?

Dummett in his article to the Boiardo cards 1972 states, that Renier believed, that the "Lady of Urbino", which was addressed by Viti in his text, was Emilia Pia (da Montefeltro) ... wife of Antonio da Montefeltro:

He was born at Urbino, an inherited the title of count of Cantiano after the premature death of his brother Buonconte in 1458. In 1464 he abandoned the studies for the military career, following his father against the papal army led by Alessandro Sforza. In 1470 he took part in the battle of Mulazzano and, two years later, he took part in the siege of Volterra, always as lieutenant of Federico III. The two were both at the service of Alfonso V of Aragon in the Kingdom of Naples in 1474.
His wife was Emilia di Carpi, the daughter of count Marco II of Carpi and Sassuolo; she was perhaps portrayed by Raphael in 1504-1505. Antonio da Montefeltro died at Gubbio in 1508, likely of syphilis.