Of relevance is the inscription of Juda Tradit[or](?) on the robe of the king under the virtue of Hope on the CY deck, clearly alluding to Giotto’s pairings (thanks to Ross here for pointing out barely discernible CY text here: viewtopic.php?f=12&t=980&p=14413&hilit=CY+Judas#p14407).

I have not had the opportunity to follow up on this, nor do I know if this has been established on this board. However, I recently came upon mention of a miniature showing Hope sitting enthroned over Judas desperatus with his hang rope in the manuscript, La canzone delle virtv̀ e delle scienze, by Bartolomeo di Bartoli (1349-74). The miniatures are attributed to a pupil of Niccolò da Bologna. The manuscript is housed in the Chantilly, France.
(Roberts, H. E. 2013. Encyclopedia of Comparative Iconography: Themes Depicted in Works of Art)

by Phaeded
Hi all,
Been on vacation in the Dominican Republic, versus Italy the previous 4 years hunting down frescoes and gelato; I’d hope to complete my promised post on the planets but as the girlfriend is Dominican (not tonsured in robes, but rather from that island ;-), we spent much time hanging with her various family members and I did not even think about tarot in between drinking rum and coffee. Anywho, my responses to the few points raised in this thread while I was away…

Huck wrote: Maybe the "king of swords" was chosen as Sforza's favourite enemy? There are still enough figures left, which present Visconti heraldry.

The highest court card as the enemy seems unlikely; and the armored Queen of Swords is who if not Bianca? The coat of arms on the horse's carpison in that suit is not Venice's and I don't think Dummet's guess as the Bon family is correct (although Colleoni and the Bon did have a mutual patrician connection in Venice which might only explain the slim possibility of the Bon acquiring and overpainting the PMB at a later date as many of Colleoni's possessions were sold off at his death).

mikeh wrote: And not only does Malatesta want tarot, but "con le arme ducale et al insigne nostre" (http://trionfi.com/etx-sigismondo-pando ... testa#1452). Now we just need to know how likely it was that Malatesta could be expected to show or give the deck to Colleoni and that Colleoni would notice the lion.

You have it backwards, in my opinion – Malatesta is clearly aware of someone else receiving tarot from Cremona – that would likely be Colleoni, who was much more central to Sforza’s ambitions in 1452. Malatesta wants the same but naturally with his coat of arms (instead of Colleoni’s...or whomever else might have received a customized PMB deck).

mikeh wrote: As far as the St Mark Lion, I didn't see any other evangelists in the fresco I posted. I don't know if there was room in the chapel for four such frescoes or not. I don't know what your basis is for saying that that lion only appeared in conjunction with the other three animals. Have you looked in a representative sample of frescos in San Marcos churches in northern Italy, or books especially dedicated to St. Mark or a St. Mark church, or lawyers' associations' stemmi (he was the patron saint of lawyers, too)?

I already stated as much in this thread (Phaeded on 07 Apr 2015, 08:34: “Finding the Lion of St. Mark in any church in Italy is not unusual - but you would find it as part of the series of the four Evangels (or I suppose if the church were dedicated to St. Mark you could find the lion isolated).”

mikeh wrote: As far as the Saint Mark lion, I don't see why it might not be on the King of Swords, in a deck for his own use, to provide an occasion for Sforza to teach his own children about the ways of Venice. Some of them might be condottieri themselves some day.

Considering the PMB clearly privilege’s the stemmi of the age-old enemy of Venice, the Visconti, that hardly allows for this far-fetched idea. Again, why is the PMB not related to the tarot that Malatesta is requesting in 1452? Venice cannot figure positively in any way from late 1449 until 1454.

Kate wrote: … I recently came upon mention of a miniature showing Hope sitting enthroned over Judas desperatus with his hang rope in the manuscript, La canzone delle virtv̀ e delle scienze, by Bartolomeo di Bartoli (1349-74). The miniatures are attributed to a pupil of Niccolò da Bologna. The manuscript is housed in the Chantilly, France. (Roberts, H. E. 2013. Encyclopedia of Comparative Iconography: Themes Depicted in Works of Art)

Kate,
This excellent article used to be available online as a pdf but can’t find it now (unfortunate because it is an unusual perdiocal in which we don’t usually find relevant material): Douglas P. Lackey, “Giotto in Padua: A New Geography of the Human Soul”, The Journal of Ethics, Vol. 9, No. 3/4, 2005: 551-572.

Some of Lackey’s key observations in relevant to your miniature and the Hope/Despair-hanged man pairing:

I hope to prove (1) that Giotto’s ensemble of seven virtues is unprecedented in visual art, and reflects recent, almost contemporaneous 14th century theorizing about the virtues; (2) that Giotto’s list of vices is, so far as can be determined, original to the painter and does not have antecedents in either philosophical or religious texts, and (3) that Giotto’s pairings of the virtues and vices provide an analyses of these virtues that is original with Giotto, psychologically interesting, and philosophically acute. (555-556)
+
To get a grip on Giotto’s innovations, compare the list of vices given by Giotto with
list of the so-called18 Seven Deadly Sins: Pride, Avarice, Envy, Anger, Lust, Gluttony, and Sloth. Giotto has knocked Pride, Avarice, Lust,and Gluttony right off the list. In their place Giotto has put Folly, Inconstancy, Infidelity, and Injustice. (I am equating ‘‘sloth,’’ a bad English translation for the traditional ‘‘acedia,’’ with Giotto’s ‘‘Despair’’ or desperatio, so this is not a change.) Four of the seven deadly sins have disappeared! (561).
+
At first sight, these sculptures [exterior reliefs on Notre Dame/Paris] seem to anticipate Giotto. The Notre Dame series contains all three of the theological virtues and perhaps three of the four cardinal virtues, (if we count Chastity as Temperance). So we have six of Giotto’s seven. In several cases (e.g., Faith, Hope, Charity) the virtues has been independently selected for inclusion, and the opposites defined in reference to them, just as Giotto did. Furthermore, if we look at the scenes beneath Faith, Hope, and Prudence we find images that are quite similar to Giotto‘s. In the lunette below Faith, there is a man praying to an idol; below Hope, there is a scene of a suicide; below Prudence, a giant wandering in the woods: these images are close to Giotto’s images of Infidelity, Desperatio, and Stultitia. (564)

On the surface of the above one might consider that Giotto and Bartoli (and other Virtue/Vice programs employing the same pairing) go back to the same source of the Parisian Notre Dame cycle of reliefs, however the Paris Despair is thrusting a sword through the gut, not hanging oneself. The hanged man as the vice of Hope, Judas or not, is thus derived from Giotto. His influence was widespread and profound (an additional reason beyond Dante that I propose the ur-tarot as focused on the 7 virtues).

Of relevance is the inscription of Juda Tradit[or](?) on the robe of the king under the virtue of Hope on the CY deck, clearly alluding to Giotto’s pairings (thanks to Ross here for pointing out barely discernible CY text here: viewtopic.php?f=12&t=980&p=14413&hilit=CY+Judas#p14407).

I have not had the opportunity to follow up on this, nor do I know if this has been established on this board. However, I recently came upon mention of a miniature showing Hope sitting enthroned over Judas desperatus with his hang rope in the manuscript, La canzone delle virtv̀ e delle scienze, by Bartolomeo di Bartoli (1349-74). The miniatures are attributed to a pupil of Niccolò da Bologna. The manuscript is housed in the Chantilly, France.
(Roberts, H. E. 2013. Encyclopedia of Comparative Iconography: Themes Depicted in Works of Art)

Yes. we've discussed the Bartolomeo, in its own thread, starting at viewtopic.php?f=11&t=862

Here is the Hope/Judas, which I scanned from a copy of Dorez's book on the manuscript: 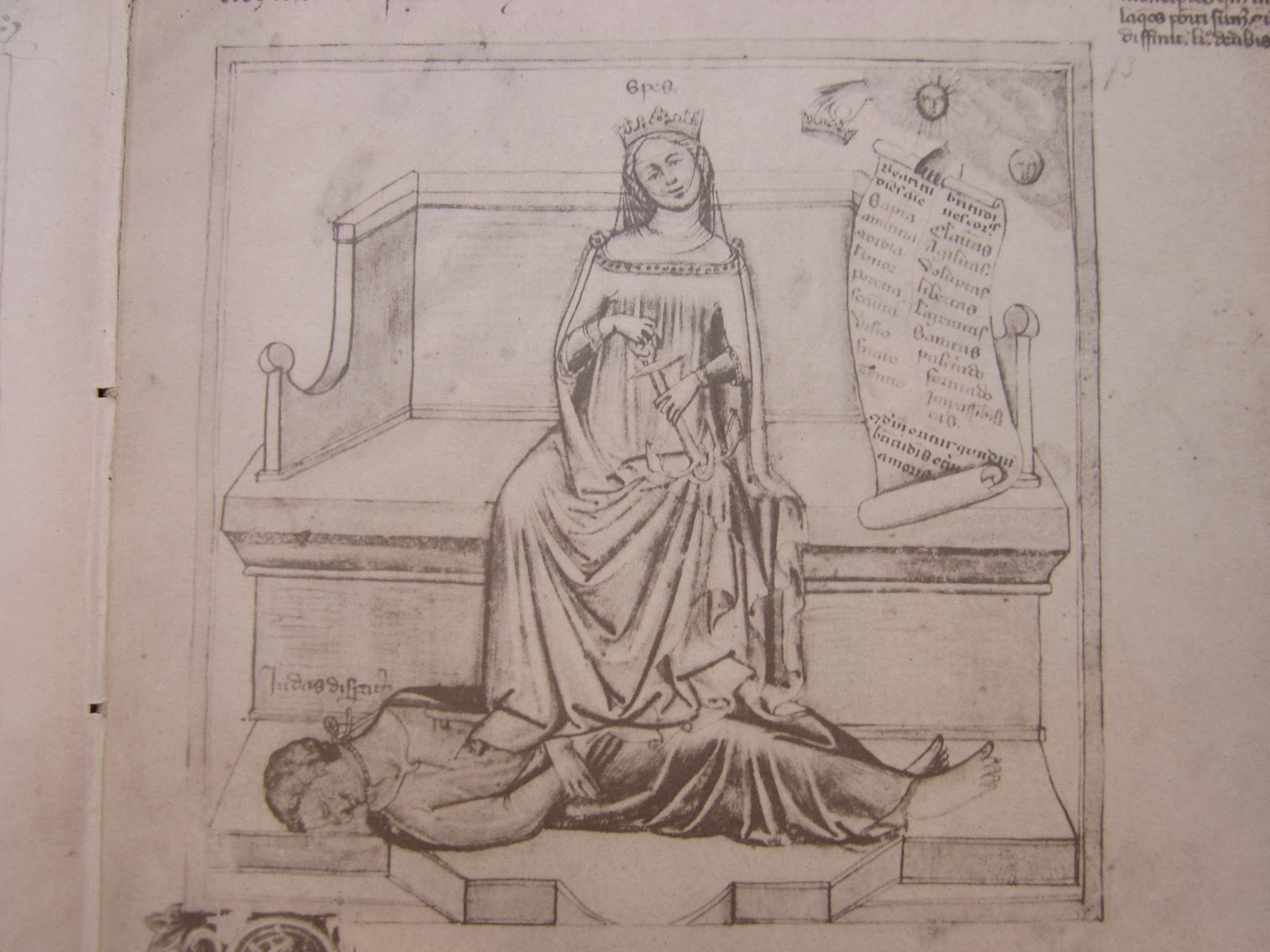 To induce to the eye
How Judas lost, traitor in despair,
Who ensured his death and betrayed his lord.

Rereading my translation of Dorez, I see that according to him, before this manuscript left Italy, it was in Milan, in the collection of Count Archinto. It is listed in the "out of inventory" section of Pellegrin's 1955 La bibliotheque des Visconti et des Sforza, p. 359; so apparently it was in Lombardy at the time of that library but was not in the Visconti Library itself, or it would have gone to Paris then with the rest of that library. She says it was bought by M. Robinson of London in 1862. He seems to have been a dealer; Dorez says it was then acquired by the Duke of Aumale. Pellegrin says that the illustrations have been attributed to Andrea de' Bartoli of Bologna, brother of Bartolomeo. She dates the manuscript to before 1349, because Luchino Visconti, who died in 1349, is mentioned as still living.

The dedication, however, is to Bruzio Visconti, who in 1349 became podesta of Lodi after his father's death. Rather quickly he lost power and fled to Bologna, then controlled by his uncle Giovanni Visconti, the Archbishop, who had delegated rulership to his nephew Bernabo. Bruzio and Bernabo, according to Dorez, fomented rebellion, and Bruzio was exiled in 1356 with nothing but the clothes on his back. He died in poverty in the Veneto. Presumably the manuscript went to Milan at some point in the 14th century, with the Visconti.

SteveM contributed another example of the type, attributed to Niccolò da Bologna, thus somewhat earlier than the Bartolomeo manuscript:

The virtues are in the top row, with their adversaries. For the cardinal virtues, in Italy the adversaries were invariably the ones indicated here and in the Chantilly. In France and elsewhere, Tarquin substituted for Epicurus as Temperance's adversary. In the Theologicals, there was one change over time: instead of, against Faith, the heretic Arius we find in 1502, the name Machomet, in 1535, Mahumetem. This is due to the fall of Constantinople, Dorez says (p. 52). That change is already in the Cary-Yale Faith card, although the letters next to the recumbent figure are not clear--whether then the actual Ottoman ruler of that day, or the originator of the "heresy", is not clear.

In Niccolo's illustration, the sciences are on the bottom, with their champions, which I will mention here as I do not intend to discuss them in detail: Grammatica, Prisianus; Dialectica, Zoroastes; Rhetorica, Tulius [Cicero]; Arithmetica, Pitagoras; Geometria, Euclides; Musica, Tubalcaim; Astrologia, Tolomeus res Egiti (sic). The Chantilly is the same, but with some different spellings, adding "Cicero" to Tulius, and not claiming that "Ptholemeus" was king of Egypt.

For Spes, notice, in both illuminations, the anchor, present in the Cary-Yale but not in the Giotto (http://www.christusrex.org/www1/giotto/SV-spes-vl.jpg). Also, the Judas with a rope around his neck is closer to the Cary-Yale than Giotto's feminine Desparato. It would seem that the immediate predecessor of the Cary-Yale's practice of putting the adversaries on the bottom of the card, underfoot, would be the Bartolomeo ms. But it was standard practice. At the end of his book Dorez has a chart with a bunch of medieval examples, listing minor variants. If I can locate my copy of the reprint, I'll scan it.