#11 by mikeh
Thanks. Two comments.

don't know, where you got the "Queen of Hearts" in Reversi from ... I know only about Jack of hearts and the Ace of Diamonds.

I see your point about those two; they have the most penalty-points.

I was getting Queen of Hearts as paired with Jack of Hearts as both being called "quinola". Here is the quote from Wikipedia:

The little quinola pool, consisting of 13 chips and it is attached to the Queen of Hearts, called the “little quinola”. It should be renewed in the same manner, in proportion as the other. The “little quinola” cannot be put to the discard, unless there are 3 stakes, or 50 chips in the pool.

I really don't understand what these "pools" are, attached to the "quinolas". The Queen of Hearts seems to have minimal special point-value, so in that sense you are right. But it is still some sort of special card, called "quinola", whatever that means in the game.

ell, in Germany and in other European countries we still have names for streets.US-America - more modern - prefers mostly numbers, which is practical, if streets are organised like a chess-board.

That's just New York. Other places are less formal. Chicago only has numbers going east-west and south of the center. Where I live, the numbered streets go one way, north and south, and named streets go the other way, east and west. They still tried to be practical, however; they thought of 23 or so "founding fathers" of the city each beginning with a different letter of the alphabet, and put them onto the east-west streets in alphabetical order, going north. Wikipedia writes (http://en.wikipedia.org/wiki/Northwest_ ... nd,_Oregon):

They seem to have run out either of names or of Portland when they got to X, Y, and Z. I think after Wilson there used to be a very polluted lake. They drained the lake and added Yeon Street, but it is a little out of place. They had more than 23 east-west streets. They used other "founding fathers" south of Ankeny. And when Portland expanded onto the east side of the river, they only used the alphabetical names as far as Irving. So really my town is a little less than half like Europe.

I really don't understand what these "pools" are, attached to the "quinolas".


Quinola and the pool

Whoever plays Quinola to a trick not only wins or loses the side-payments detailed above but also either wins or enlarges the pool.
If Quinola is forced, or is led to a trick, its player pays a supplement (remise). This is an amount equivalent to the latest pool - that is, the one most recently formed. The first supplement that occurs is used to double the only pool there is. The second and all additional supplements go to form new pools, which are kept separate from one another. The dealer always adds his statutory five to the latest pool, which is therefore also the largest.
The latest pool is won by the Quinola holder when he succeeds in dumping it on the lead of another suit. If then no pools remain, a new one is formed by the contribution of five from each player, and ten from the dealer, as at the start of the session.

Well, his rule is likely one of the earlier, naturally there might be different versions.

In Reversis more or less constantly money (or chips, called "fishes") is paid. And in some games it must be paid back. I wonder, if they didn't get confused about it ... :-)

That's an interesting coded street-name-use in Portland, mixing them with the alphabet. Perhaps once, when a city "Tarot" is founded, they could use the trump-names as a row ... :-)

In Cologne we have a half-circle street, outside of the old city wall, called the "Ring" from his form. This is sorted according ruling dynasties and their time. It starts in the south with "Ubierring" (the Ubier was the first population in Cologne) and finishes in the North with Theodor-Heuss-Ring (first president of the Bundesrepublik) in the North, well beside a place, which once was called Adolf-Hitler-Place and nowadays Ebertplatz (according Friedrich Ebert, Reichspräsident 1919).

Other half "Rings" circle around this inner Ring, the last is the Autobahn-Ring. So Cologne is like an onion, cut by river Rhine, somehow like the bitten apple of Apple.
Huck
http://trionfi.com

#13 by Huck
In the search for the 4 highest cards Ace of hearts, King of Diamonds, Queen of spades, Jack of clubs in the text of Daniel Martin 1637 I've found the following: 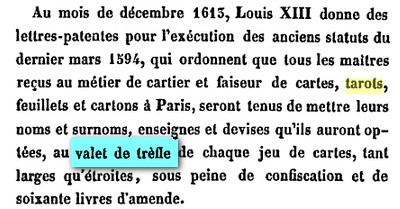 The author Starklof in his theater play in 19th century uses the name "Rolichon" (a known card producer name) for the Jack of clubs (as already reported). 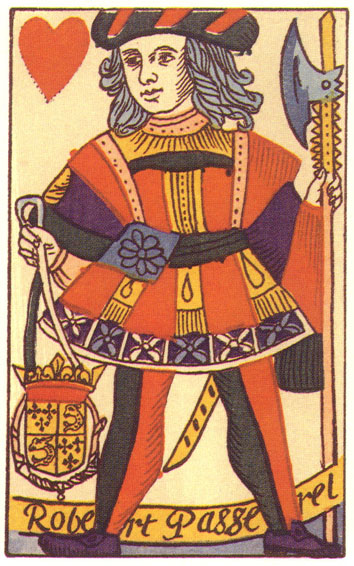 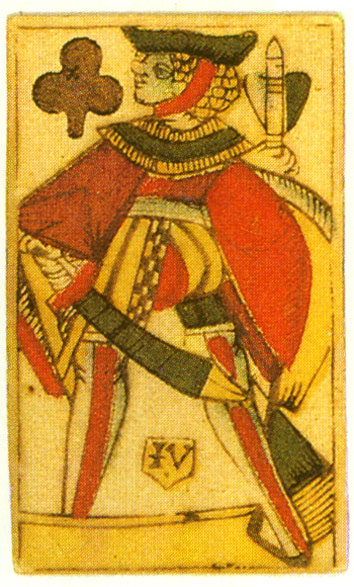 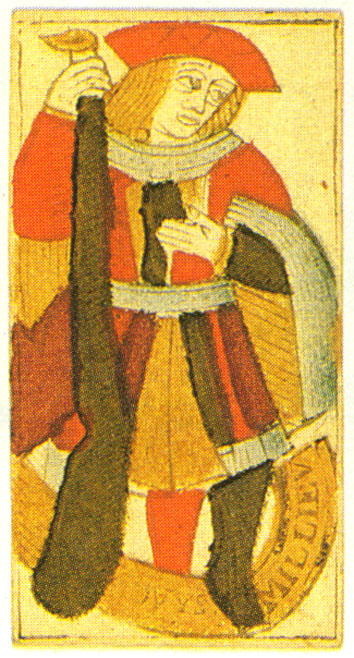 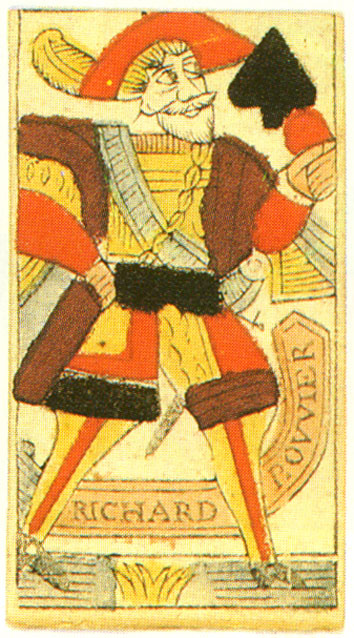 ... has his name on the Jack of spades

At least one can say, that it sometimes was the Jack of Clubs, but not always. For own researches this page might be helpful.
http://a.trionfi.eu/WWPCM/WWPCM/fran/fran-un.htm

In the 1630s the Alsace with Strassburg had a rather horrible time. Alsace is said to have lost about 50 % of its population by the 30 years of war. France made territorial wins and gained influence, which might have taken influence on that, what happened with cards in Strassburg.
Huck
http://trionfi.com