#41 by SteveM
In the pamphlet Catone interprets the comet as an omen of forthcoming successes of the Turks: another interpretation of the same comet of 1472, by the astrologer Martin Bylica at the Hungarian court, made a judgement of it for the Hungarian King Mathias Corvinus (as he has also done for the comet of '68) - the nickname Corvinus was based upon the King's heraldic Crow (Matto + Crow = Mathias Corvinus!?) - there is another Naples/Aragon connection, in that Mathias was married to Beatrice of Naples (also called Beatrice of Aragon) - ---

We discussed before here another illustration of a comet involving Mathias Corvinus:

"The Pope, in his triple crown, seems to be overpowering the Emperor who holds onto the broken spindle which signifies his loss of control over Bohemia. For Paul II had already excommunicated the King and had crowned his own man, Matthias Corvinus."

Martin Bylica at the Court of Matthias Corvinus: Astrology and Politics in Renaissance Hungary

Other similar of his articles here:
http://dhayton.haverford.edu/articles/
Immature poets imitate; mature poets steal; bad poets deface what they take, and good poets make it into something better, or at least something different.
T. S. Eliot
SteveM
SteveM

#42 by SteveM
Another interpretation of the same comet of 1472, by astrologer Martin Bylica at the Hungarian court, rendered a judgment for the Hungarian king Mathias Corvinus (as he did for the comet of 68) - the nickname Corvinus was based (Matto + Raven = Mathias Corvinus!) - again there is another connection to Naples / Aragon, Mathias was married to Beatrice of Naples (also called Beatrice of Aragon)

The humanist John Vitez led a conspiracy against King Mattia Corvino in 1471: in 1474, the humanist Ferrarese Carbone wrote how this led to the view that those who were educated in Italy were corrupt, even though "scholars and Eloquent "they were unworthy - Florentine humanist with their ancient political theories and republican ideas led to conspiracies against the Medici "one after the other":

In 1473, Carbone was part of the sumptuous procession of four hundred people, led by Sigismondo d'Este, which passed from Ferrara and, by way of Bologna, Florence, Siena and Rome, to Naples to escort Eleonora of Aragona. To give Ducal greetings to the governments of the States which have passed through, a work was given to him in preference to Boiardo, Tito Vespasiano Strozzi and Niccolò da Correggio, who were also part of the procession. It is perhaps on this occasion "Aragonese" that King Mattia Corvino first offered Carbone a place in his court - an offer he refused: but which encouraged him to write books dedicated to Corvino, or otherwise laudatory of him --
Immature poets imitate; mature poets steal; bad poets deface what they take, and good poets make it into something better, or at least something different.
T. S. Eliot
SteveM
SteveM

SteveM wrote: The humanist John Vitez led a conspiracy against King Mattia Corvino in 1471: in 1474, the humanist Ferrarese Carbone wrote how this led to the view that those who were educated in Italy were corrupt, even though "scholars and Eloquent "they were unworthy - Florentine humanist with their ancient political theories and republican ideas led to conspiracies against the Medici "one after the other":

The most notorious perhaps being the Pazzi conspiracy, in which Pope Sixtus IV was directly involved:

There was an Italian superstition, that the rule of a sixth always led to the ruin of Rome:

The sixth Tarquin, the sixth Nero, this sixth;
Rome has always been lost under a sixth.
Immature poets imitate; mature poets steal; bad poets deface what they take, and good poets make it into something better, or at least something different.
T. S. Eliot
SteveM
SteveM

#44 by SteveM
Besides Carbone, there are some other Poets: #45 by SteveM
Both used the poetic form the Strambotto, in which form we have one of our earliest (anonymous) listings of the tarot trumps in the A order:

(I recommend this pious angel,
The world, the sun, the moon & the star,
To the lightning & to that wicked devil,
Death, traitor, and old man,
The wheel, chariot and justice of God.
Fortitude & Temperance & lovely Love,
To the pope, emperor, empress,
To the bagatello, to the most happy madman.)

An example of a Strombatto by Panfilo:

#46 by rithkhmer
I have read your article, it is very informative and helpful for me.I admire the valuable information you offer in your articles. Thanks for posting it..

We discussed before here another illustration of a comet involving Mathias Corvinus:

Steve (or anyone),
I'm unclear on the iconography and meaning of this engraving, but nonetheless have a proposal.

The emperor is Frederick III who sought to unify the Habsburg hereditary lands of Austria, yet also has dynastic claims to Hungary as well as to the Burgundian inheritance. Burgundy is ruled by Charles the Bold in this time period, but comes to his demise in 1477. If the cartoon dates to then or later, is the withered tree (end of the dynastic tree) and coat of arms of Fleur-di-lys not a reference to Burgundy (Borgodie), with the upside down spelling of "DUX" also referring to the ill-fortune of that House, no longer able to support the Emperor? Duke Charles the Bold heated up his political intrigues in 1474 by coming into conflict with the Archduke Sigismund of Austria (the boat in the cartoon is Austria), who refused to restore his possessions in Alsace; ultimately Charles is killed at the Battle of Nancy (1477), when his head was cleaved in two by a halberd. Charles' primary symbol was the lion - as noted in the cartoon and on his coinage, as well as being featured in the center of the Valois stemma (see the Double Briquet below, struck under Charles the Bold in Bruges, 1475). The emperor in the cartoon literally stands upon the lion with one foot, as if that is the power source from which he launches himself.

But the real question is this: if a comet why no tail, and why is it labeled "sub Saturno" with its malignant ray (Saturn being a "bad" planet after all) striking Charles' tutelary animal, the lion, on the head? Charles dies on January 5th, which falls in the month under Capricorn, one of the two signs of Saturn. The cartoon seems to suggest the pope can have his way with Frederick III because his bellicose ally of Charles the Bold (and his House of Valois dynasty) was no more.

As an aside, I should state my primary interest here is in the use of the lion as a symbol of a region, cowed in defeat in an astrological context (i.e., it parallels an argument I've made for the VS Strength card).

PS the coin of Charles the Bold, the reverse being the stemma of the House of Valois, but both sides feature lions:

2 Postumio has a skull on a table.

A skull usually should mean "Death" ... the Italian Sola-Busca interpreter, fixed on number 13, interpreted, that Catone means Cato and Cato killed himself and therefore this should be "Death", but overlooked the small star in the upper right corner, and apparently overlooked the small signs, which have signifying character and were used more than once.
Aaah, MY ERROR ..... I'm wrong with it, I've to excuse. She noted the star and made the Footnote "121. II coloritore ha inserito nella carta la stella e il motto "TRAHOR FATIS", che non esistevano nella versione a stampa." ... which means, that the star was added by the illuminator together with the "TRAHOR FATIS", which shall mean "I am drawn by Fate" according Tarotpedia.

Even if added by the illustrator, it is still of interest I think to consider what signiifcance there is, if any, to the items on the shield, that is the star at the top of his shield, his name around its circumference, the motto at the bottom and a palm tree in the middle -:

The star above a palm tree makes me think of the Phoenix constellation, however as that Southern constellation wasn't named until the late 16th century it is too late :

The palm tree was also the symbol of Judea, so the Star over Judea could have a biblical, christian meaning ---

The Magi/Astrologers saw a star shining over Judea, and were 'drawn by fate' or guided by the star to the land of Judea --

The Star over a palm [symbol of justice] is also the Coat of Arms for Montalboddo [la stella sopra una palma, simbolo della giustizia, Montalbotti] - however, I think the star in this case may have been the star of David type (I haven't seen it, only read the description, so can't be sure) --

The wordplay between Postumio and Postumus (posthumous = after death), brings me back to the Phoenix, with its motto " 'Post fata resurgo", after death I rise (it was also used as a term of familiarity between friends writing or speaking to each other after a long time of silence) -- which in turn recalls the phrase for me of 'rise for judgement' on the CY -

Re: the connection between the Phoenix and the Palm tree for those that may not know - it was said the the palm tree was named after the phoenix because the Phoenix was said to nest in the highest branches of the Palm tree (in Greek - το Φοίνιξ φωλιάζει σε φοίνικα - to Foínix foliázei se foínika: - Φοίνιξ = Phoenix, φοίνικα = palm tree): like the Phoenix, the palm (phoenika) is said to rise up again if it is burnt down 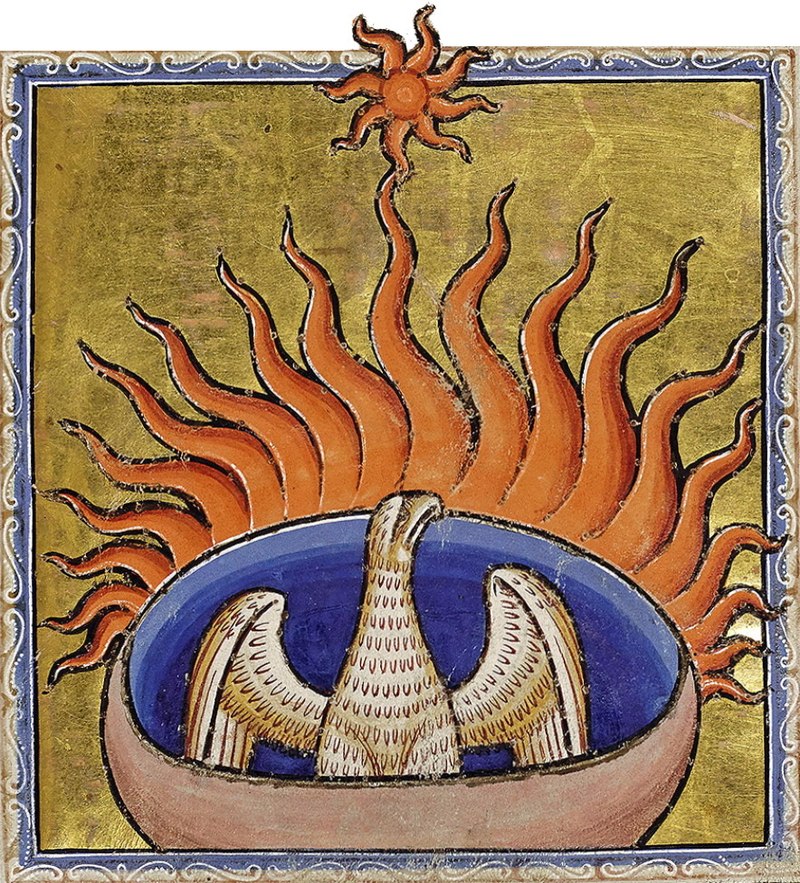 Immature poets imitate; mature poets steal; bad poets deface what they take, and good poets make it into something better, or at least something different.
T. S. Eliot
mikeh
mikeh

#49 by mikeh
Well, yes, but that star-like object above the phoenix you posted doesn't fit, as I'm sure you know. Here the "star" (astrum, celestial body) isn't black, it's red, and of course is the sun
https://www.abdn.ac.uk/bestiary/ms24/f56r

The sun is the only astronomical object I know of that the phoenix is associated with--unless, as you give it, a round-about way via the palm tree, judea and the Magi.

There is a more direct route. The phoenix is associated with Christ in numerous bestiaries, e.g. Physiologus, https://books.google.com/books?id=I3tUy ... ix&f=false

So if Christ = phoenix, and phoenix = palm tree, you have it. Perhaps that is what you meant. If so, I apologize.

I assume you are talking about the star plus palm tree on Postumio's shield, http://www.tarotpedia.com/w/images/d/df ... _Busca.jpg, for those who don't have these cards at hand.
SteveM
SteveM

#50 by SteveM
I am simply stating that the palm/phoenix homonym on his shield is a symbol of resurrection/renewal after death (postumio = after death); of course it is connected with Christ as such, a connection which one might read as reiterated here as the palm is also a symbol of Judea and a star over Judea also refers to Christ -

including as it does then the concept of resurrection one could see in this trump a connection with the Angel/Judgment card of traditional trumps, rather than with just Death (as one might if just considering the sepulchre (if that is what it is?) with the skull on top) :

The palm tree - a symbol of victory in ancient Rome, and of the Triumph over Death in Christianity --
Immature poets imitate; mature poets steal; bad poets deface what they take, and good poets make it into something better, or at least something different.
T. S. Eliot