#1 by Huck
Niccolo di Calvello is known for the production of c. 3500 cheap decks, which were bought in the course of the period 1442-1456 by the silk dealers. In the early long time arrangement of the silk dealer business he's the supplier for cheap decks (1-2 Soldi), Antonio di Dino made middle class decks (5 soldi) and Antonio di Simone expensive decks (9-12 soldi).

Franco Pratesi writes about him:

This cardmaker, "Nicholo di Chalvelo fa i naibi", provides the greatest amount of cards, more than three thousand packs. His supplies are always on a dozen basis – in practice, card amounts that another maker provided in terms of packs, he was able to provide in terms of dozens. Apparently, he had developed a system of production that allowed him to supply most of the packs and at the smallest cost. Only in a couple of cases his cards are indicated as "di forma", but I imagine that all of them were produced with woodblocks (and possibly not even painted).

The name Calvello is rare in Florence, very rare. This seems to have had a natural reason. According this map and tool to research the distribution of a name in modern Italy ... 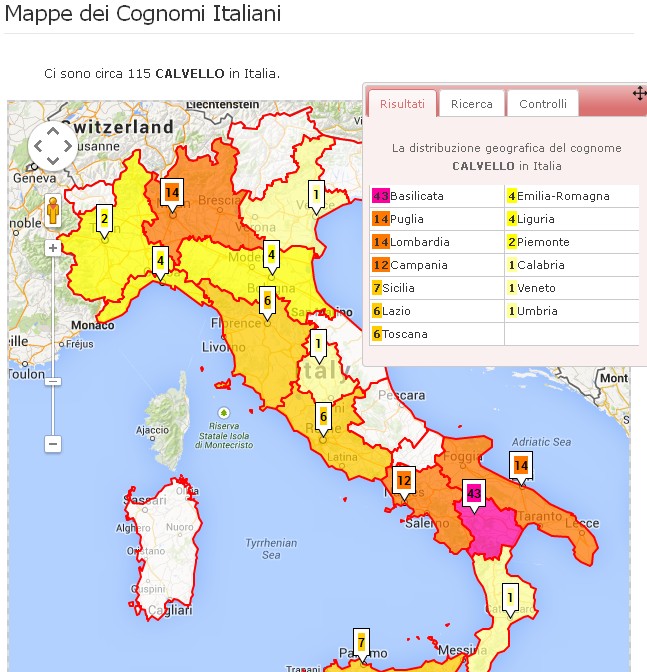 ... the name is used nowadays mostly in Southern Italy. This has the natural condition, that there is a city "Calvello" located just in the dark violet spot with the most persons with this name (43). 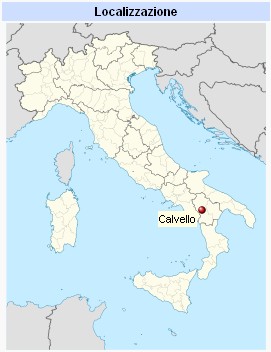 The city existed at least since 1089 (first documentation according Italian wikipedia). There's some reason to assume, that the family name Calvello had its origin in this location "Calvello".

King Alfonso V of Aragon (as Alfonso I of Naples) made Gaeta his beachhead for the conquest of the Kingdom of Naples in 1435, besieged it, and to his own disadvantage displayed great generosity, by aiding those unable to bear arms who had been driven out from the besieged town. After a disastrous naval battle he captured it, and gained control of the kingdom.

From the local position of Gaeta In the West it looks, as if Gaeta stood mainly for the import "from South" and possibly also from "from the West". In the South had been the kingdom of Naples, where king Alfonso V. reigned.
In the West in far distance had been Aragon, ruled with some influence od Alfonso V.

1380 BARCELONA The inventory, dated 26th October 1380, kept by the Barcelona merchant Nicolas Sarmona, who lived in St. Daniel's alley (Callejon San Daniel), lists "unum ludus de nayps qui sunt quadraginta quatour pecie" ("a game of cards (naips) of 44 pieces"); a strange number which could equally well refer to two sets of tarot trumps or to a (normal) deck with 4 cards missing (an incomplete pack). The same word for cards seems to have been used as in the Viterbo reference above.

1382 BARCELONA The special Register of Ordinances in the historical archives of the city of Barcelona, for December 1382, includes a text prohibiting several games including dice and cards cards to be played in the house of a certain town official, subject to a fine of 10 "soldos" for each offence. It would take another 70 years or so for treasury authorities to raise revenues from playing cards by imposing taxes on their sale.

1384 VALENCIA 23rd June "Un nuevo juego llamado de los naipes" ("a new game called naipes") was prohibited by the Consul General of the city, as though it had only recently come to official attention.

1403 RAIMUNDO DE SENTMENAT During his stay at the Castle of Jerica, the King of Aragon (Martin the Humane) asked to be sent 'un Joch de naips'.

Some years ago there appeared a Spanish report about extant Spanish woodcut playing cards from c. 1400, somehow I lost the link, what a pity.

Considering all this inside the question, what's the real background of the person "Niccolo di Calvello", who isn't found in the Florentine archives, as far I know it (Franco Pratesi in private communication noted, that he remembered to have read, that he's from Careggi, 7 km in distance to Florence), I personally get the feeling, that one should consider, if Niccolo di Calvello isn't a man of the South, maybe living near Florence, but not as a original Florentine.

He appears first in May 1442 on the silk dealer lists. That's just the year, when Alfonso V of Aragon took Naples.

Alfonso V.'s career as a ruler started in 1416, when his father Ferdinand I died.

Ferdinand I (Spanish: Fernando I; 27 November 1380 – 2 April 1416 in Igualada, Catalonia) called of Antequera and also the Just or the Honest) was king of Aragon, Valencia, Majorca, Sardinia and (nominal) Corsica and king of Sicily, duke (nominal) of Athens and Neopatria, and count of Barcelona, Roussillon and Cerdanya (1412–1416). He was also regent of Castile (1406–1416).

Palermo, where the first known appearance of woodcut technology in Italy occurred (1422), had been under political
control of the house of Aragon.
Bisticci in Florence, who wrote a biography about Alfonso V, tells a story, according which Alfonso was dedicated to card playing in his youth, but left this habit.


The English version of it:
The Vespasiano Memoirs: Lives of Illustrious Men of the 15th Century by Vespasiano Da Basticci (Translated by Emily
Waters, William George, Published 1997)
http://books.google.com/books?id=lyMQTg ... w#PPA69,M1


"He strongly condemned gaming, denouncing it as pernicious. He used to tell how, being then 18 years old, he was in Barcelona during the feast of Nativity and, happening to play one evening, he lost some 5 thousand florins. After he had lost them he called one of his chamberlains and bade him to fetch some money. When he was brought he played again and began to win, so that in the end he won back all he had lost and likewise all the money of his fellow-gamesters. With this heap of florins before him, he bade everyone keep quiet, and then bade the chamberlain to fetch the little book of Our Lady, and this having brought, he opened it and then and there made oath, with both his hands on it, swearing and promising to God and the Virgin Mary that he would never play again; a promise, which he kept to the day of his death."

In the proceeding of the story Alfonso gave all the money back and "no man shall ever again behold me at the gaming table"
<A HREF="http://www.newadvent.org/cathen/15380a.htm">Newadvent to Bisticci</A>

Assuming, that the story might be true ... Alfonso V had been 18 years old in the year 1414, two years before he became ruler himself.

Independent from Alfonso's personal view on playing cards, there's some plausibility, that woodcut technology in combination with playing card production had an early existence around Barcelona and spread from here to Sicily, together with the general Aragon influence.

Alfonso's first attempts to get a foot on the Italian peninsula date to 1421. A second greater try followed in 1435 with the death of the Naples queen Johanna II.
1442 saw his success.

We have other indications, which see a Northern influence in the woodcut technology from Germany and the Flemish countries, just by the many productions, who have really survived.
Possibly there was a parallel development in two distant regions.

Users browsing this forum: No registered users and 29 guests