#391 by mikeh
How do you get 3 double scales yielding the number 8? It seems like it should have been 4 double scales.

If you have a cube, you can cut it with 3 cuts (from top to bottom, from left to right, from front to back) in 8 smaller cubes. I think, it belongs to the platonic ideas, that 8 was called a number of Justice ... long before 8 was the number of the Tarot Justice. Somewhere I've read so. The 8 belongs to the row of the binary numbers and to the row of the cubic numbers. 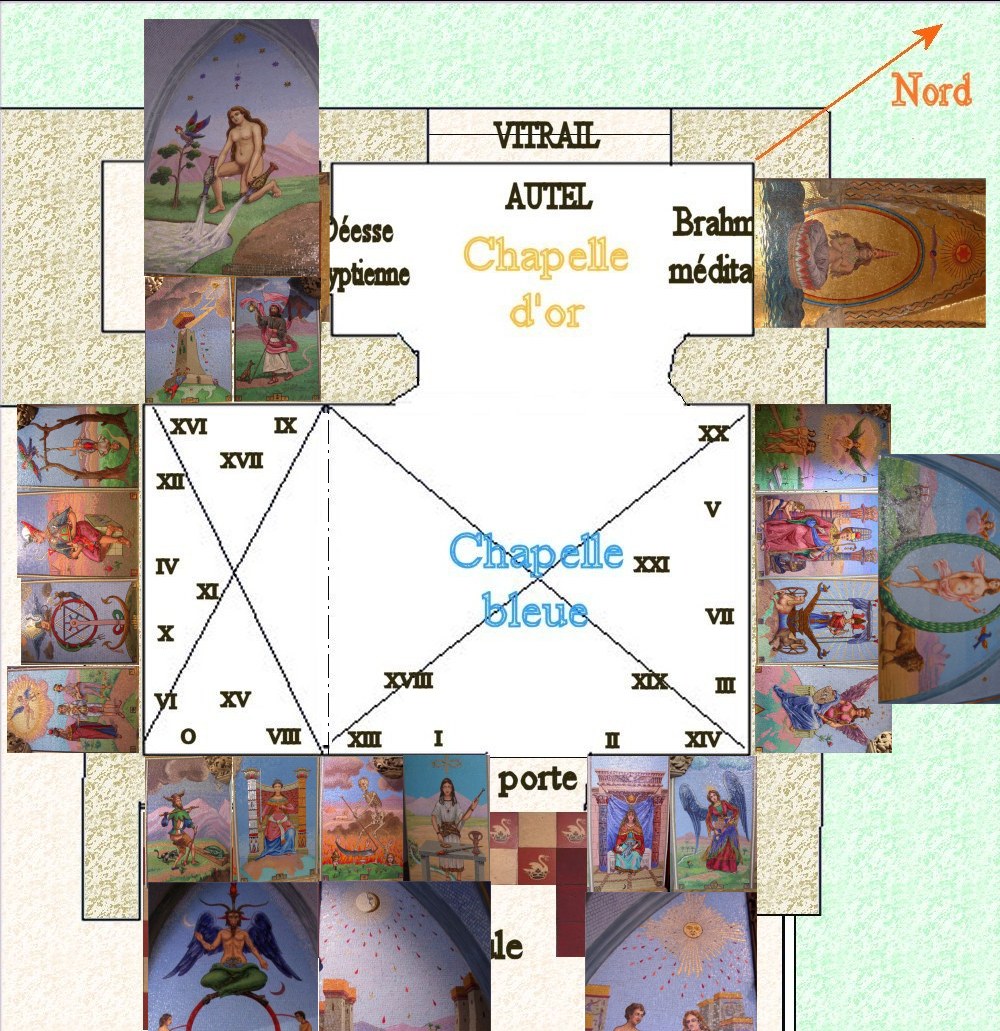 Older material, as once presented at Aeclectic
http://www.rando-saleve.net/salhist.html

Based on doctoral research (Van Anrooij 1997), it is now thought likely that van Maerlant was also the author of the hitherto anonymous Van neghen den besten ("On the Nine Worthies"). This would be his last work. It is one of the few works with European distribution whose source text was written in Middle Dutch. The work had a profound and lasting impact on the honor code of the Western European knightly elite.

The text is part of the discussion in this work:
https://books.google.de/books?id=UyWeGg ... IJ&f=false
(the text is not complete; it seems, that the thesis is not accepted by all researchers in the field)
Huck
http://trionfi.com

Many thanks Huck! I've been doing nothing but reading this literature and only one scholar cited the Dutch source (was wondering how legit it was), so thanks again for the very timely post.

At all events, its quite clear that the Nine Worthies first took hold in the "Benelux" Franco-Flemish region (e.g., Longuyon is 40 kms from Luxembourg) and spread from there (to nearby Cologne, Arras, etc.).

For an early yet monumental version of the Worthies in Cologne and the spread of the genre in a communal (versus courtly) context, this chapter might interest you (in Google books): Andrey Egorov, "Charismatic Rulers in Civic Guise: Images of the Nine Worthies in Northern European Town Halls of the 14th to 16th Centuries"
in Faces of Charisma: Image, Text, Object in Byzantium and the Medieval West, Edd. Larissa Tracy, 2018: 205–240.

An excellent article that updates the controversy (has serious critics) with the author saying van Maerlant's thesis has merits but does not conclusively decide either way.

I found this conclusion from his review of all early Dutch references to the Worthies of great value however:


I would even venture that the Nine Worthies - without any corroborating Chronicles context - represent an extremely abridged digest of world history (the "worthy" part at least), as typically each Worthy's titulus is made to say how many years before or after Christ each died.

What is particularly fascinating is that the earliest Dutch text (which can merely be dated before 1343, but if associated with van Maerlant, d. c. 1300, which would be much earlier) calls for the addition of Worthies, which is precisely what happens in the second half of the of the 14th century in the context of the French courts, but on the Dutch manuscript:

Finally, Comburg preserves a short epilogue in which the author summons his audience to add to this list of Nine: »He who wants to praise better knights or wise men than these Nine were in their days, mention them without delay« (l. 582–585). (ibid, 354)


As for the on-going Marziano discussion (which I'll elaborate there), one might conceive of Marziano's game in terms of the elevation of Filippo as a "new worthy", not in the context of world history and fellow worthies, but in direct discourse with the gods (however euhemeristic and their virtues allegorized) where one can receive the divine bounties/virtues in order to become a worthy. What is absolutely novel is the medium of a deck of cards, which necessarily contributed to the fourfold organization (e.g., 9 would never work)....to which I'll turn to Valentina Visconti, the bridge between the Parisian and Milanese courts, in having both "Saracen" and "Lombard" cards in her possession at the time of her death in 1408. 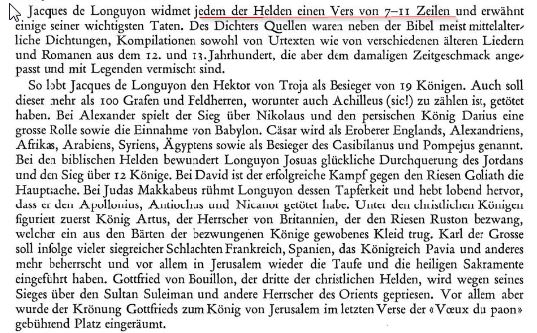 The author states, that each of the heroes gets in the text of Longuyon a 7-11-lines-biography, mostly a collection of victories. Together this should make about 100-120 lines of text, which is not very much.
The old edition, which I have from Gallica, has 30 lines for a page, which makes 4 pages of 183 or 201, if I interpret the text correctly (the book has two texts ... Jacques de Longuyon,Vœux du Paon ; Jean le Court dit Brisebarre, Restor du paon ... it's not totally clear to me, where the second text starts) .
https://gallica.bnf.fr/ark:/12148/btv1b ... checontact

Abecedarium: Erzählte Dinge im Mittelalter.
Peter Glasner, Sebastian Winkelsträter, Birgit Zacke
Ambassador GmbH, 04.06.2019 - 316 Seiten
Page 188/189 Artikel "Das Pfauenmahl"
https://books.google.de/books?id=aW6dDw ... &q&f=false
... gives information to the content of the Longuyon work. The Pfauenmahl refers to a scene in the life of Hugo Capet, founder of the genealogical line of the Kapetinger. The Pfauenmahl is embeddded in a scene with the emperor Alexander fighting in India (Alexanderroman).

This Pfauenmahl refers naturally to the situation of 1312. Heinrich VII, the future emperor, expects promises from the current French king. In the true history this operation didn't work well. Heinrich VII died in a battle against a French king in Naples, Robert of Anjou. The next emperor didn't become a king of Luxembourg, but of Bavaria (my interpretation).

It seems, that the Neun gute Helden weren't invented with Longuyon, likely the idea was around already a longer time. 9 heroes with a conqueror of Jerusalem couldn't have existed before 1100 AD, that's naturally true.
It might be a good idea to think about Kegeln or Kugeln (with 9 pawns) or about nine-men's-morris in this context (at least this is my suspicion) . A nine-men's-morris-board was engraved in a very rough way in the throne of Charlemain in Aachen. German kings were crowned on this throne.
https://upload.wikimedia.org/wikipedia/ ... -Spiel.jpg 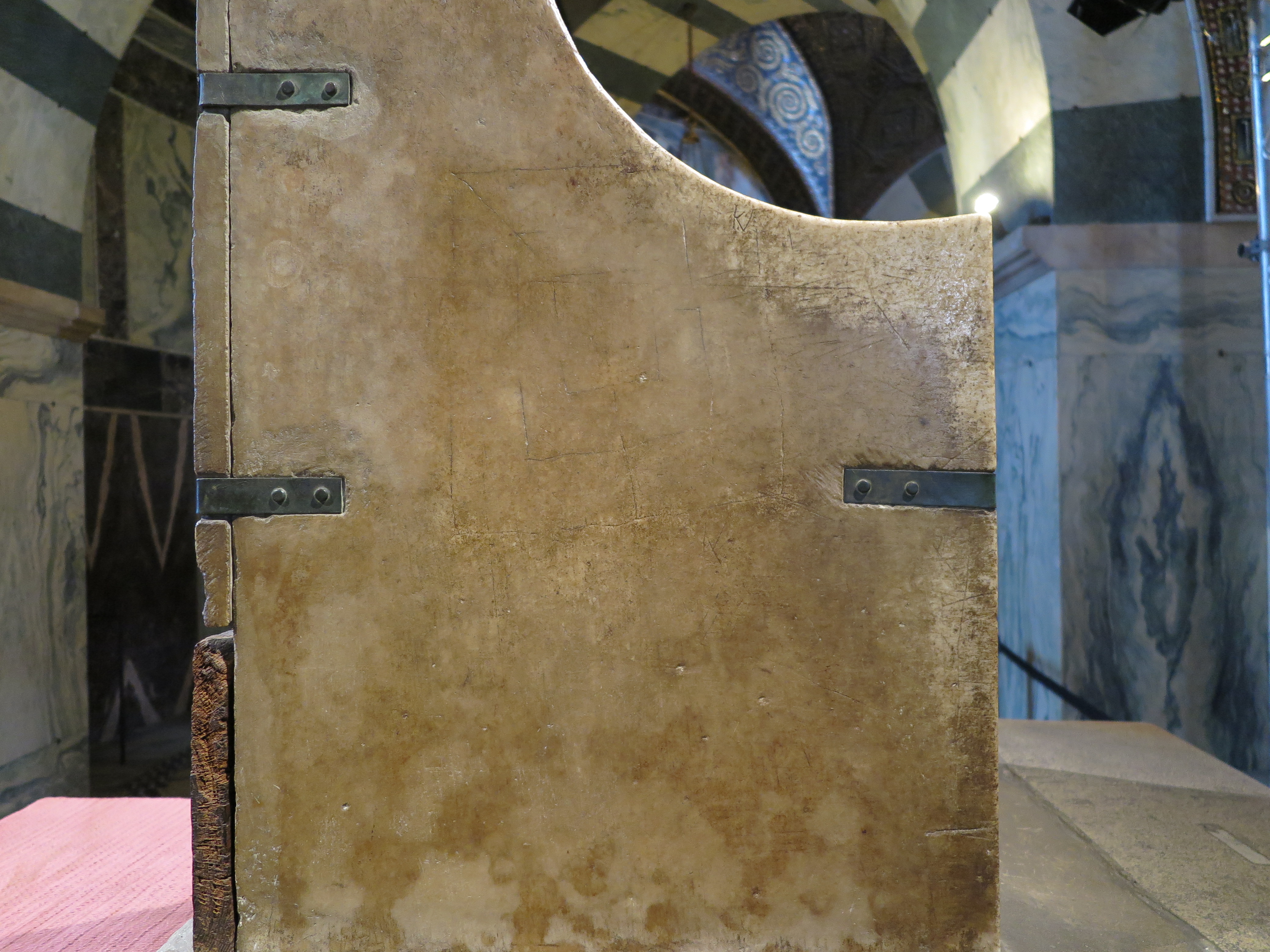 Further one shouldn't overlook, that the city of Cologne (not too far from Aachen, Luxembourg and the Netherlands) made a very clever deal with the bones of 3 holy kings in the year 1164. This was so successful, that Cologne could start in 1248 a very ambitious church building project and the archbishop of Cologne became very powerful in Germany, especially in the question, who becomes the next German king. 3x3 = Neun gute Helden suit very well to 3 Holy kings in Cologne.
In 1288 the ruler of Luxembourg became involved in a battle between citizens of Cologne and the archbishop of Cologne. The ruler of Luxembourg, father of Heinrich VII, died at the battle of Worringen and the mighty archbishop lost. Heinrich VII was still a boy then. In 1308 Heinrich VII became surprisingly the new German king, just 30 years old ... with the help of the Cologne archbishop.
Huck
http://trionfi.com 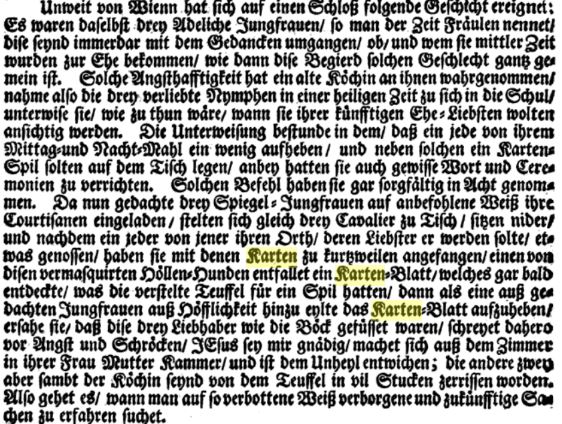 3 noble Virgins in Vienna demand to know more about their unknown future husbands. An old cookmaid knows about a methode, which involves the presence of playing cards, some food and some magical rituals. Somehow three mirror-virgins (?) are generated which attract 3 cavaliers, who sit down at the table and somehow (?) play with the cards. One card falls to the bottom and one of the real virgins attempts politely to take it up. At that opportunity she detects, that the feet of the cavaliers look like animal feet, which means , that these are devils. She cries and can escape, but the other both virgins become victims to the devils.

This bloody story is in the text embedded between other divination stories of similar character, but without the involvement of playing card (chapter: Am sibenden Sonntag nach Pfingsten = "at seventh Sunday after Pentecost" p. 193-199).

The story might have some indications, that divination with playing cards existed in 1746 in Vienna, but I don't see a reason to be sure about it.
Huck
http://trionfi.com

The Vicar of Wakefield – subtitled A Tale, Supposed to be written by Himself – is a novel by Irish writer Oliver Goldsmith (1728–1774). It was written from 1761 to 1762 and published in 1766. It was one of the most popular and widely read 18th-century novels among Victorians.

From the English edition 1766
http://books.google.de/books?id=uwwUAAAAQAAJ&pg=PA108 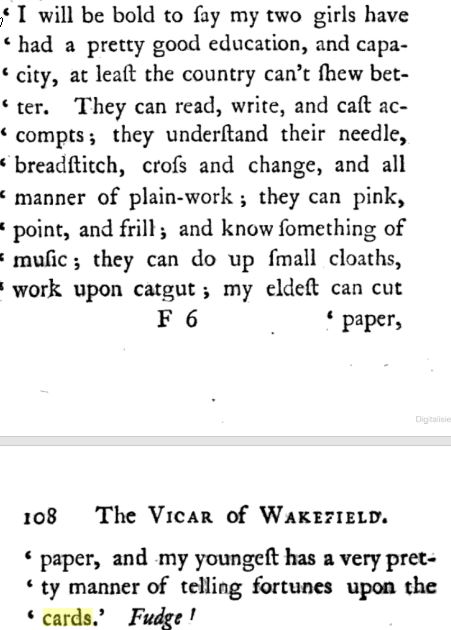 The History of the Fortune-teller, in the Old-Bailey: Exhibiting the Intrigues and Characters of Several Personages of the First Rank; and Some Droll and Familiar Scenes, Drawn from Real Life ...
by W. Griffin, 1764 - 160 pages
http://books.google.de/books?id=incnE85C2u0C&pg=PA15

The Town and Country Magazine, Or, Universal Repository of Knowledge, Instruction, and Entertainment, Band 2
A. Hamilton, 1770
https://books.google.de/books?id=Dv82AA ... ds&f=false 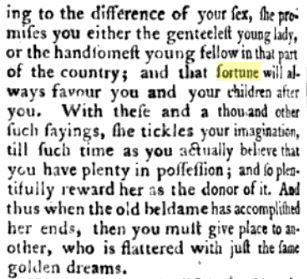 It's interesting to observe, that the cartomancy technique is considered a low art in comparison to other arts of divination. My general impression in this research is, that in this early time since 1762 cartomancy is a rare object in the field of fortune telling.
I wonder, if the 7-years-war 1756-1763 or the finish of this war (which was a rather international event involving many countries) helped in the international distribution of cartomancy. The spreading of Tarot and of books with game rules had as its starting point ca. 1750, the year after the longer war between 1740-1749.

The author was from Germany and worked as advisor for King Frederick the Great of Prussia. He mostly wrote in French. He died in 1770, it's not clear from this, in which year the author wrote this text.

... quoted from https://books.google.de/books?id=VMSHDw ... ld&f=false .... the French title was the original work and was published in 1767. The quoted text contains interesting biographical details in English language.
Biography also at ...
https://en.wikipedia.org/wiki/Jakob_Fri ... n_Bielfeld
Huck
http://trionfi.com

#400 by Huck
In the following text the author claims, that he had observed a card divination scene in the year 1747. However, the extant text is from 1769.

part 2 is here with the relevant passage at page 175
https://books.google.de/books?id=vq9CAA ... en&f=false 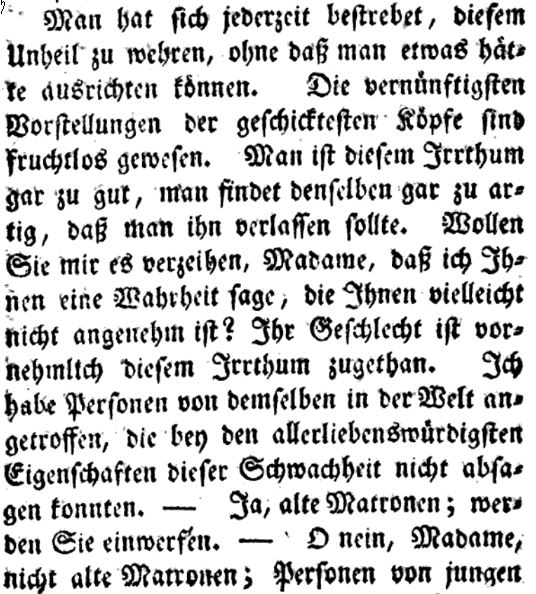 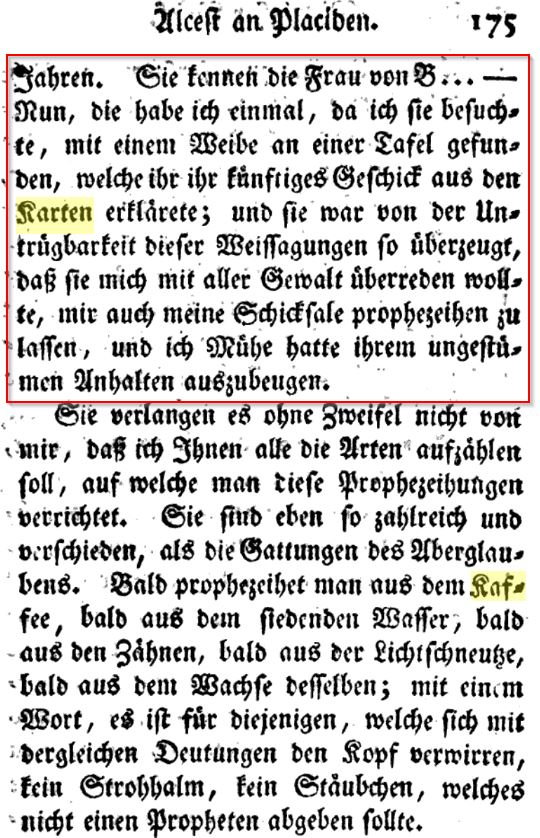